When I was first getting excited about music, it was the early 90s. I mean EXCITED, like insatiable. Being raised in the northwest, this was around the grunge boom, so there was a lot of pride and enthusiasm about some of the great bands coming out at the time – Alice In Chains, Soundgarden, Nirvana, etc. Having been raised on a steady diet of Kiss and other hard rock/metal bands up to that point (thanks to a couple of uncles and an older brother) it was a matter of time till I cranked out the tunes on my own shiny new stereo.

It was just before my 12th birthday when I had enough money saved that I could buy my first home stereo (not a cheap portable one, I mean a REAL DEAL stereo) – I was pumped. Fortunately, I had enough money saved that there was enough dough left over to buy a couple albums also. I bought Pearl Jam’s debut record and (deep breath/admission of guilt…) the ‘Wayne’s World’ soundtrack… 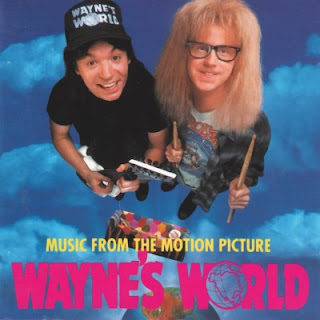 I know, I know… but come on. I was 12 at the time. I saw Black Sabbath, Red Hot Chili Peppers, Queen, Jimi Hendrix were on the soundtrack and that was enough for me at the time. Not very metal in hindsight, but we all gotta earn our wings along the way. What I realized looking back is that I have owned more than a few embarrassing metal soundtracks. Seriously, WHY are so many soundtracks that cater to metal-loving audiences missing the mark?! (Even more back in the day I would say) Sure some got close to being good, but often times the movie was so stupid it often tainted the songs it seemed to promote. In that vein, please take a stroll with me down memory lane: 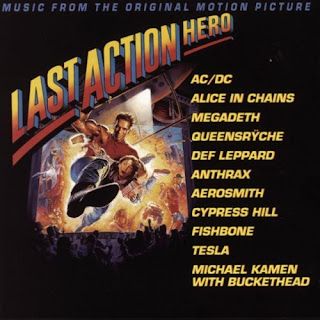 About a year later I scored the ‘Last Action Hero’ soundtrack. The movie boarders on ‘Mystery Science Theater 3000’ level of laughability, but at the time it was your standard-issue Arnold Schwarzenegger action flick safe for younger viewers. However, the soundtrack gave me a shot in the arm of more metal (Megadeth, Anthrax, Alice In Chains and others), the Megadeth song in particular was the one to hook me. I also thought the Fishbone track was pretty heavy and I had never heard of them at the time so it was cool discovering new bands through soundtracks. In hindsight, I can appreciate how the movie actually played a good number of the songs on the soundtrack throughout the movie, but there’s always a “stain” of cheesiness thanks to the movie being less than cool to most self-respecting metalheads. 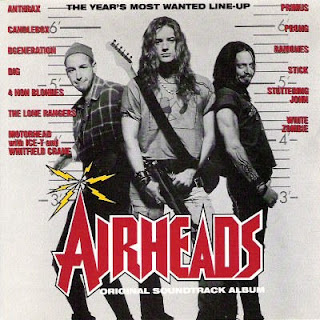 It was roughly a year afterwards when a movie came out called ‘Airheads’, I’m sure most of you have heard of. With a cast of Steve Buscemi, Brenden Fraiser, and Adam Sandler as a power trio metal band I expected a bit more from this flick. It wasn’t necessarily terrible, but it’s still considered a bit of a blemish on those actors track records. However, you put unreleased songs from Prong, White Zombie and Anthrax on the soundtrack and – you guessed it – I bought it. Unfortunately the rest of the soundtrack, with a couple exceptions, is pretty shitty. Bonus points though for band’s name in the movie: The Lone Rangers (makes me think of the band Two Lone Swordsmen) – pluralizing a singular object = thumbs up. 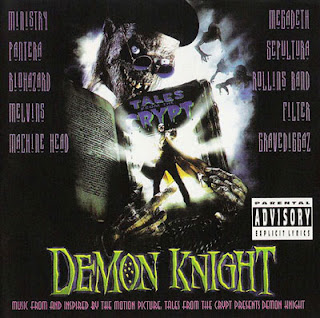 About six months later I picked up the 'Demon Knight' soundtrack. Of the four soundtracks listed here, I’d say this one is the clear winner. Featuring songs from Machine Head, Pantera, Ministry, Sepultura, Biohazard, and the Melvins you bet your ass I was blaring this thing like only a 14 year old would. I honestly can’t even really remember the movie’s plot, it was a ‘Tales From The Crypt’ movie so I’m sure it was pretty much ‘by the numbers’ but hey, I dug the shock and awe that came with the action and horror. The soundtrack also had an awesome song by Gravediggaz. For starters, they rap about horror themes – amazing! Secondly, with as little hip-hop/rap diet in my system at the time, this one song made me feel like I was instantly deep in the street (this street happened to be in the suburbs in Washington state) – again, 14 year old mentality here. So all in all, this soundtrack didn’t burnout like the others, in fact, I’d say it’s pretty rad. But, and this is a big “but” here, it also had the Filter song “Hey Man, Nice Shot”. The reason this offense is so grievous is purely contextual. You see, from this time onwards for many years, hell, I even STILL hear it used, this song has been the staple for any and damn near ALL action scenes for clichéd Hollywood action movie trailers. Seriously, stop and think about it for just a few seconds: how many movies have you seen where either in the movie itself or in the trailer you hear that bassline from the beginning of the song (rather ominous, eh?) and then the angry, loud chorus riding shotgun to explosions, gun shots and fight scenes. IT DRIVES ME FUCKING CRAZY. This song is sooooo over-used and greatly lowers the average of metal's influence to the world (you KNOW more random strangers would recognize this song over a typical Metallica or Pantera song through simple repetition alone) - point is: metal doesn't need Filter, arguably not even a proper metal band, to represent our stereotypes. I bet the band is getting royalty checks like you wouldn’t believe for how many times clips of this song get played (runner-up would be White Zombie’s ‘More Human Than Human’ – especially in the mid-late 90s). I’m pinning it’s prolificacy on this soundtrack because of two main reasons, A) It’s used blatantly and obviously in the intro credits, and B) It was the first place this song actually appeared. It preceded its official release by at least a few months on this soundtrack. That’s right, the first domino was tipped over HERE on the ‘Demon Knight’ soundtrack… “Thanks”, now we’re all sick of this song and instantly are left with a sour taste in our mouth for any movie daring to beat this dead horse.

Are there any good, older metal soundtracks out there that deliver the goods?

What early to mid 90s soundtracks am I forgetting here? Help me out… I’m going for just the cheesy ones, but hell, even if you can name good ones, it’s all about nostalgia. Part II is already in the pipline, and be warned, it dips its toe into the nu-metal pool.