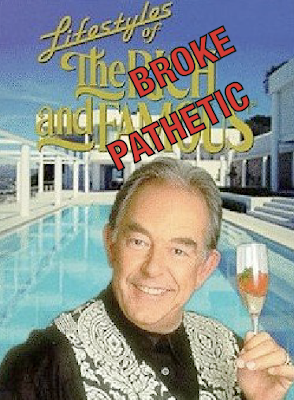 As I've stated before, one unfortunate aspect of metal is the lack of information about the earnings of metal musicians. In sports, for example, this type of information is often public. Why not in metal? I have long asked for complete transparency in the realm of metal...but my calls to Steamhammer records have gone unanswered, so too have my faxes to Wild Rags. It's for this reason that we here at Metal Inquisition have decided to roll up our sleeves and once again check into these matters the only way we know how. Real estate.

It just so happened that as we were starting this investigation, a fantastic email from a reader who lives in the same town as Manowar came into our mailbox. The email featured all kinds of fantastic insight as to what it's like to be at ground zero of the Manowar epidemic. Notice that I use the term "ground zero", which is often used in the context of 9-11...because in a way, Manowar itself is a good bit like a musical 9-11. 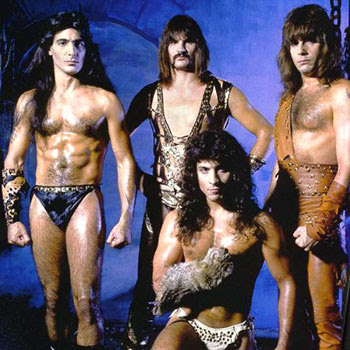 Manowar...pioneers in homoerotic attire since 1980.

As with all information we publish, we had to be thorough in checking out just how factual the reader's information was. As it turns out, it all checked out in multiple ways...and thank god for that. As a result of his email, our readers will now have a more thorough picture of what it's really like to be in and around Manowar. Prepare yourself...you are moments away from reading about how the KINGS OF METAL really live their lives. It's gonna' be a bumpy ride. Get ready. 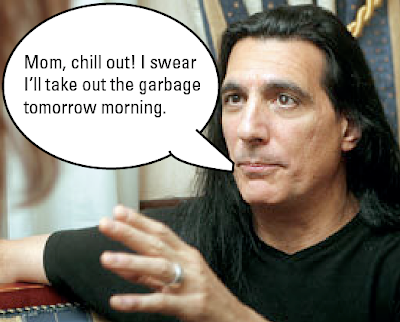 FACT #1: Joey DeMaio lives in the basement of his parents' house in Auburn NY

I know, it's not hard to believe at all. Actually, it's barely shocking...but knowing that it's actually true is simply fantastic. It's a bit like when the gay community found out that Rosie O'Donnell was actually a lesbian. They already knew about it...but having it out in the open gave them all the ability to finally move on. 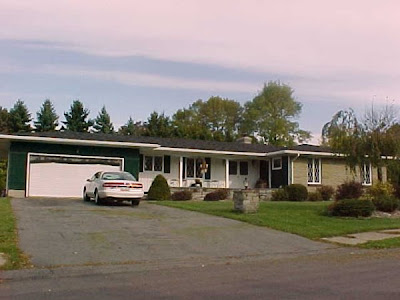 This is the house Joey lives in. It's worth $190,000. As before, our non-American readers can convert this amount, and other amounts in this article, into their own currency here. Yes, it's out of the basement of this house that Joey runs his musical empire. Maybe when his parents move away or retire in Boca, he'll inherit the house. Could that be his sweet Ford Probe out front? Nothing says "metal" like a fifteen year old American coupe with four cylinders that puts out a "meh" inducing 110 horse power. By the way, look at all the weeds growing in and around the driveway...Joey's mom is going to be pissed! Joey better get out there and do some weeding...pronto! I can hear her saying "Joey, I don't care if you are the King Of Metal. You better be the King Of Weeding, go out there and take care of that driveway!"

Who's that sexy Italian beast wearing the karate uniform? And what about that Casio watch and platform shoes? It's the one and only king of metal of course! He probably keeps this amazing outfit in a closet at his mom's house. Mom threatens to throw it out during every spring cleaning...and Joey flips out each and every time.
As much of a pain as it probably is to have a leech like Joey living in your basement, he also happens to be a nice Catholic boy. Oh yes indeed. Joey is a member of the Knights Of Malta, a catholic order of some kind with a very confusing history. Check out Joey wearing some sweet robes. He looks like an aging, upstate New York, Italian dracula:

Can you imagine being Joey's mom, and seeing him in his dracula robe, or his furry armor sneaking fat 19 year old girls down into the basement? The woman is a saint. 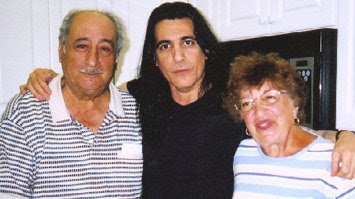 Here we see Joey with his parents, who no doubt cry themselves to sleep over what a joke their pathetic son has turned out to be. See the microwave oven in the back? That's where Joey's mom has tried to put her head during numerous suicide attempts.


Regarding Joey, our reader states:

I have the great misfortune being from the same shithole town as Manowar. One of the perks of living here, though, is that I can get close looks at Joey DeMaio's thinning, dyed hair as he shops for broccoli at the local grocery store. You see dudes wearing Manowar shirts around town all the time. Guys of that age probably went to high school with them, and knew them before they were 'rock stars'. I can imagine how things were in the early 80's when all the local scumbags were into metal. Now, things have changed all of their illegitimate children are a bunch of wiggers. I don't know what's worse. 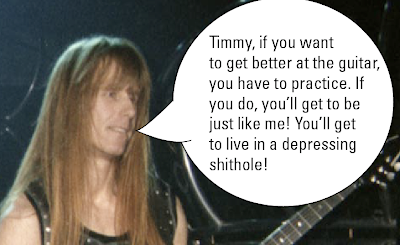 I know, I know...these are not exactly revelations, but aren't you grateful to know these things are actually true? Our reader also filled us in on the fact that Karl lives in this house (see below), which he rents. Since he rents, I wont bother giving you the price...but looking at the picture, I think you'll agree that you could probably trade a bag of potatoes for it. 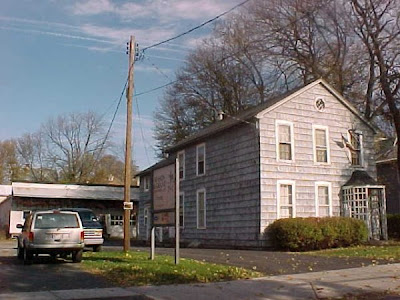 The building where Karl Logan lives, which was previously Manowar's practice space. What did you expect...a castle with torches and a mote?

Our reader tells us more:

Karl Logan is the local guitar teacher and lives in some shitty old building that Manowar used to rehearse in. He drives a beat up pickup with "9/11 was a lie" bumper stickers on it. Did I mention he wears a fanny pack everywhere? Living here, I get to see Karl pulling cash out of the fanny pack he wears everywhere to pay for his coffee (dude kinda reminds me of Mantas in that laugh-out-loud funny looking kinda way). 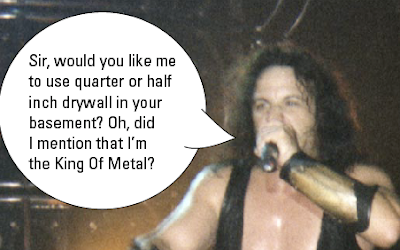 I know, I know...you probably figured that this was the case. I wish I lived in Auburn so I could have Eric Adams come and do the drywall in my basement. I would blast Manowar upstairs as he huffed and puffed carrying sheets of drywall down the steps. Can you imagine? It would be amazing. Mr. Adams lives in a modest home. A VERY modest home that costs $69,000. 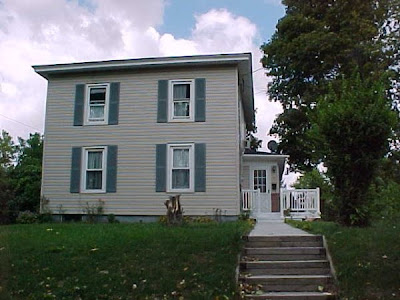 Look above the door, at least the guy has satellite TV. Good for him. I guess you could call this "the house that being the King of Metal built", or "the house that singing at children's parties built". Either will do.

As pointed out by one of our readers, Eric also teaches archery classes at the local Bass Pro Shop. You can read about his hunting abilities in the local news sources here. Eric also seems to perform music at children's festivals. But don't judge him, I'm sure he performs a catalog that is very high in metal content.

Much like a dead bird's feathers which loose their luster after the years, Eric's hair appears to loose both its pizzazz and its hair dye when he's not on the road. What the hell kind of hair color has his plumage faded down to? Is he trying to blend into the surroundings as part of his camouflage? I can't believe he gets away with hunting when he lives so close to Syracuse. If Karl Crisis hears about this, there's gonna' be trouble.
Our reporter on the street tells us:

I get to eavesdrop on Eric Adams' (real name Lou Marullo, his stage name is a combination of his kids' names) tales of glory at recent European festivals, while watching high school football games. Eric lives in a small house, right next door to a metal foundry on some depressing little street. Perhaps that's where they get their swords made. He does construction work on his off time from the band, which probably equates to 11 months a year. One of his kids is in a joke cover band called Motley Crouton that plays the shithole bars around here.

If you want to go further into the world of all things Manowar, check out Eric's son's MySpace page here. You can also check out his band's page here.

In closing:
Do any readers have any input about other metal demi-stars, their monetary earnings or real estate holdings? Let us know.

Also, if the reader who sent us this email, or any other resident of Auburn can send in pictures of Eric carrying drywall, or Joey buying broccoli...you'll get many, many thanks from us, and the entire world. The only guy who won't thank you will be this 17 year old who just got inked. Imagine his surprise when he figures out that he makes more money bagging groceries part-time than Joey does. Ouch. 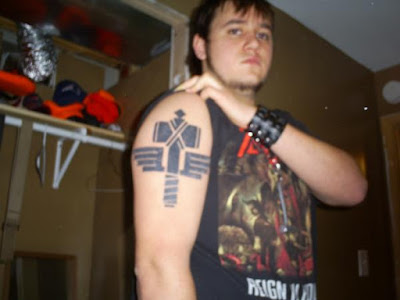 In the past, postings about Machine Head and Rob Flynn's Disease (RFD for short) got us an insane number of page views, mostly from angry fans. Our posts also initiated heated, angry diatribes in Machine Head boards. Let's see what this post does to Manowar fans. I can't wait.
Posted by Klaus at 1:07 AM