Last Friday I picked my sad sack of old bones off the couch and rode the train into Brooklyn to catch Repulsion, Pig Destroyer, and Brutal Truth at the Brooklyn Masonic Temple.

The hottest new heavy metal venue!
You're probably thinking what I was thinking when I first heard about this show--Brooklyn Masonic Temple? I'm not Jewish and I know very little about the religion, but a temple is just about the last place I'd expect to see Repulsion, Pig Destroyer, and Brutal Truth performing. It's a huge, old stone building and the bands played in what looked like a school gymnasium. It's actually a pretty cool place, except for the fact that there's no air conditioning and once the bands started playing you could cut the BO with a knife. It was especially great when everyone would go outside between bands and loiter on the sidewalk and the locals would walk past and gawk at the mutant showgoers. For those of you that don't know the Brooklyn Masonic Temple is located in beautiful Fort Greene--a trendy, prohibitively-expensive brownstone neighborhood filled with the kind of annoying, wealthy thirtysomethings that make me green with envy.

I should mention that Mr. Albert Mudrian, Editor-in-Chief of Decibel Magazine, was kind enough to put me on the guest list so my cheap ass didn't have to pay to get in. He was also nice enough to put SkullKrusher on the list, but he decided to bail at the last minute to go out on a date with some chick he met on eHarmony. The sad, pathetic old loser claims he got laid, but I know better. My guess is that his date went something like this.

The show was sponsored by Decibel who were giving out magazines like Auntie Anne's gives out pretzels at the mall. I also received a drink ticket upon entering that entitled me to one free Ardbeg cocktail. Being the alcoholic that I am I had to indulge. Half-assedly mixing fancy, smoky scotch with ginger beer, however, was not a good idea. Instant headache. Real life radiation sickness.
I have no idea why, but Repulsion played first. They weren't nearly as haggard as I expected for guys in their mid 40s that grew up in Flint, Michigan. Turns out only two of the guys were original members and the other two scabs were from Exhumed. Worst of all--NO DAVE GRAVE!!?? (WTF!?) They ran through most if not all of Horrified and did a Venom cover, but honestly the sound was so shitty I could barely make out what they were playing. All you could hear was the guitar and some tap-tap-tapping of drums in the background. The vocals were almost completely inaudible (at least from where I was standing). Why is it so hard for metal bands to not sound like complete shit live? When will people learn that triggering completely ruins the sound of drums? To top it all off I saw some of the worst stage diving I have EVER seen during Repulsion's set. Some mongoloid got so excited he even hit Scott Carlson in the face with his microphone. For an idea as to how awesome Repulsion was live back in the day watch this. 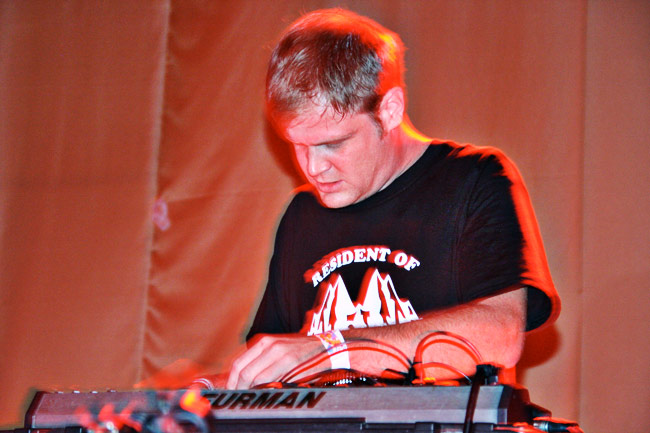 Next up was Pig Destroyer. I was a big PD fan in high school and college, but I haven't listened to or paid them any attention in years. They still sound exactly the same as I remember--fast modern grindcore with chugging thrashy riffs--but they now have a DJ who plays samples, twiddles knobs, drinks beer, fistbangs, throws water at the crowd, tells people to mosh, and who at one point pulled out what looked like a belt sander and proceeded to re-enact my favorite Razor album cover. If this guy's actually getting paid he might just have the best job in the world. I like how Scott Hull wears Under Armour wristbands when he plays. Kevin Sharp stood next to me the whole time and he still wears that stupid cowboy hat, has a huge beer gut, and was wearing mandals. 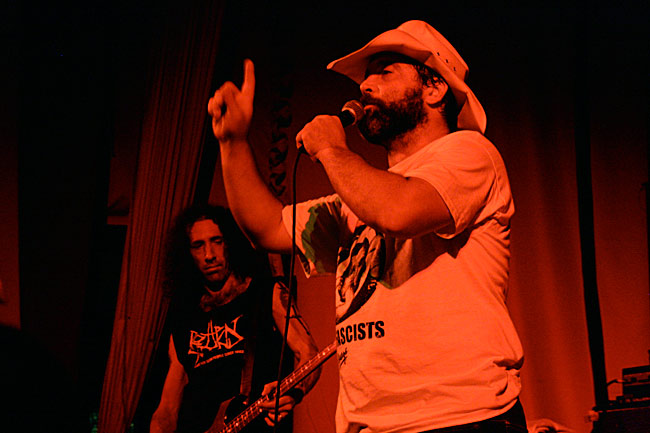 A couple of sad old men.
I stuck around for most of Brutal Truth's set, which is a lot longer than I should have. I was really into Need to Control when I was in high school, but if you put a gun to my head now and demanded that I recite the lyrics to a single Brutal Truth song the walls would be painted with the contents of my skull. The singer/guitarist from Lethargy (now there's a band that actually should reunite) is playing guitar for them now, which I didn't know. I wonder how jealous he is that Bill and Brann went on to fame and fortune with Mastodong while he's stuck playing with a washed up, reunited band no one cares about? The only good thing about Brutal Truth is Rich Hoak. He's a terrible drummer--my 80 year old grandmother could play a faster blastbeat, but he makes the most hilarious drumming faces. I also managed to take a picture with Dan Lilker and he is easily a foot taller than me and very hairy. He was, however, too embarassed to show his baby teeth. Note his patented pose, which he ALWAYS uses. See proof here. 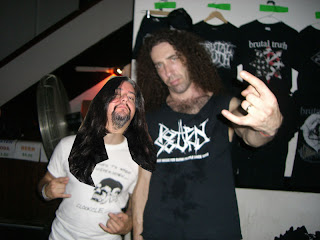 A short sweaty Italian and a tall sweaty Jew.

There were so many gross, sweaty, fat shirtless dudes at this show I wanted to puke. There were, however, a surprising number of attractive females who looked completely out of place. I made the mistake of not weaing earplugs because I hate them and because the show didn't seem that loud, but of course my ears were ringing for days afterwards. I am officially an old man. I even spotted a couple of nerds walking around with copies of Infinite Jest in their hands. Who the fuck reads at a metal show?

The next day I went to work and afterwards went to a beer garden and drank for eight hours straight. I proceeded to lose my wallet (which was kindly returned to me by a lady sitting behind me) and both of my credit cards (did not find them). What a fucking weekend.
Posted by Gene Hoglan's Balls at 4:00 AM