Chuck Schuldiner And His Sweet Shirt With Kittens On It

Chuck Schuldiner, it would seem, was a very likable guy. Yes, I know that the high-heel women's boots he wears in the Dynamo DVD are laughable, as was the way he parted his hair during the "Human" album.

I know that some think he was lame because he changed the inverted cross on the Death logo to not be inverted (some said it was because he became a Christian, which is unlikely as he was raised in a non-religoius Jewish family, and he even said he did it to do away with the connection between his band and Satanism). More importantly I have noted that very few, if any people comment on the disappearance of the little skull guy on the "H", a far more important and significant omission.

All of this may be true, but Chuck made one contribution that is far more important than any other for the world of metal. That contribution is that he wore a dope t-shirt with kittens on it for this interview. Not only that, but he often wore it live and was photographed wearing it in Metal Maniacs. 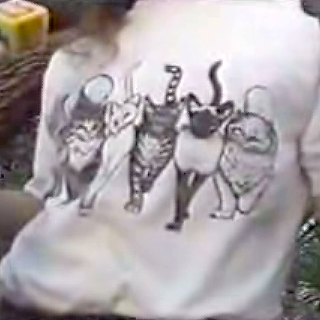 One last Chuck note....during the time that my family and I lived in Miami, he lived in a nearby storage space. In Florida, living in storage spaces was common practice for people who were in bands, as has been discussed in great length by Richard Christy of the Howard Stern show (Richard played drums for Death, and is now a full time member of the show.) I remember the weekly Miami newspaper doing an interview with Chuck in 1992, where he talked about living in the storage space, and how during the recording of "Human", his old piece of crap car had caught on fire due to electrical problems.

It should come as no surprise to anyone that being in a death metal band is not exactly a fantastic money-making proposition, but living in a storage space in Miami during the summer months seems like the most depressing thing on earth. I picture Chuck singing the lyrics to "Pull The Plug" as he showered under a water hose in the back of the building.
Posted by Klaus at 8:52 AM