Hottest fashion accessory of the season: The dragon bag 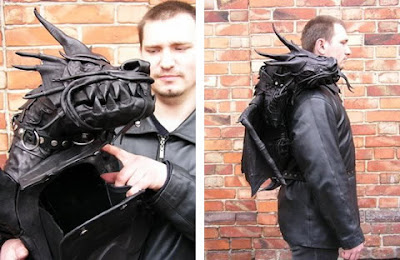 Not just a fashion accessory, this bag has magical powers. Embedded deep within its leather eyes, are magic crystals that keep the opposite sex at least 50 feet away at all times.

When I think back to some of the things I've worn in my lifetime I cringe. Like any other true fashion pioneer, I was fearless. At my lowest point, I was a mix between a death metal fan, and a gang-banger from the movie Blood In Blood Out. To say I was confused is an understatement. 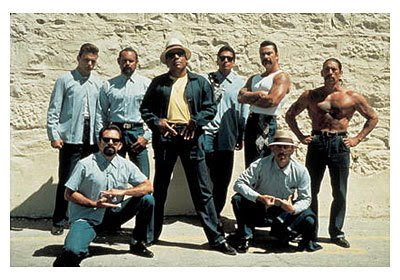 Is it weird that I wanted to look like these guys? Most metal fans would say "yes, very weird indeed", but the guys in Excruciating Terror would surely understand.

However badly I dressed, and perhaps continue to (what do I know?) I have to say that I was truly amazed and bewildered upon finding the dragon bag that you can see above. Out of all the fashion arenas into which I dipped my toes during my youth (and there are many), I'm proud to say that I never went into any kind of a goth direction. Not the black metal/goth route, not the NIN/goth route, not the The Cure/goth route, not the Nightmare Before Christmas/goth route. I know this is not saying much, but when you've been steeped in stupidity for long periods of time (as I have) you have to take both comfort and pride in the little things. 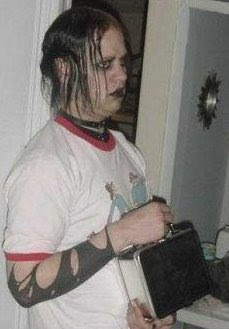 Today, perhaps more than ever before, the line between goth and metal is blurred, at least to a partial outsider like me. When I used to Tivo Headbanger's Ball a couple of years ago, I was amazed by how many bands had female singers and dudes in bondage pants. Call me an old man, but I miss the days when musical styles and the fashions that went with them were clearely defined. Bermuda shorts and skateboard? Ah...you must be an Anthrax fan, good to meet you. Leather jacket, bullet belt, Slayer shirt and black boots? You, sir, are a speed metal fan...the pleasure is all mine.

Sometime around 1995, the world went upside down. Metal guys starting wearing bigger pants (even Chris Barnes wore JNCO jeans), then came the skate shoes and fashion accessories from other subcultures. When metal dudes started shaving their heads, I knew it was all over. By the time goth started to creep in (by way of black metal usually) I knew it was all over. Today, I found the picture of the dragon bag and I began to dream. I began to dream about a simpler time. A time when metal was metal, goth was goth and you knew where people stood. A time before ICP blended metal, with pseudo hip-hop and stupdity. 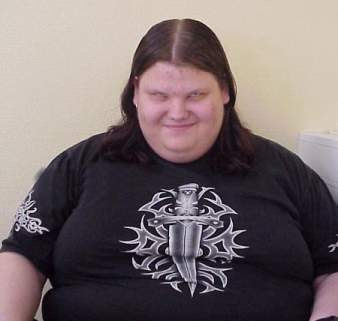 Is it male or female? Does it make a difference?

Once I saw a picture of this bag/monstrosity I began to wonder just how many misguided metal fans are out there, dreaming of rocking this thing along with an oversized Craddle Of Filth shirt, maybe sweet fishnet arm things, and those big bondage pants that appear to be all the rage in that subculture. In a way, you almost have to give these people credit, they have managed to make themselves unlikable at a time when you can like metal and all kinds of stupid music and still get plenty of action while you are still in high school. 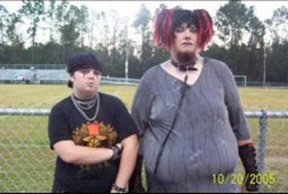 Duh, doesn't he know that gray makes you look fat?
So while the picture of the bag will no doubt depress most people who have any sense of decency, it actually cheers me up. Today I can proudly say that there is at least one horrible metal trend that never had me as an active participant. Hoooray for me!
Posted by Klaus at 1:12 AM