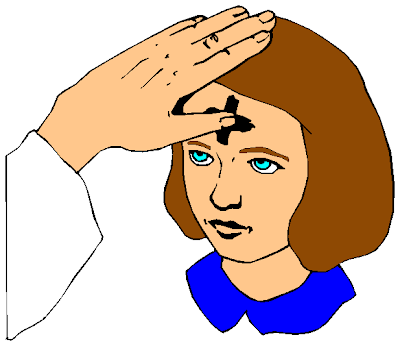 Growing up in South America in the 1980s, little in the way of metal was readily available to us. The tapes my brother and I owned back then were tenth generation dubs, and the Metal Hammer magazines we cherished were extremely hard to come by. The damn magazines cost five times the price printed on the cover, they were at least two years old by the time we bought them, and were often missing most pages by the time they made it to the store. I know I sound like an old man, the type who constantly tells the story about how when he was a kid he had to, "walk up hill in the snow both ways in order to get to school." But see, I AM an old man. As a matter of fact, here's a picture of me with wearing my Cannibal Corpse leotard after I did some shopping at my local supermarket. 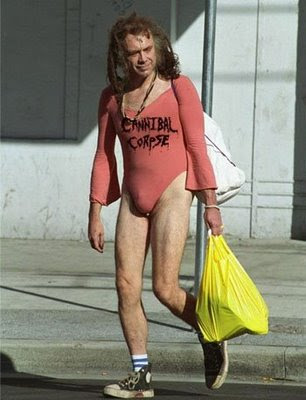 So you see, I can't help myself. I'm old(er) and I now tell war stories to everyone. Look, I'm merely trying to paint a picture here, so give me a chance. Metal was beyond underground and obscure during the late 80s in most South American countries. So few people knew about it, that they guarded whatever information or music they had with all their might. The metal scene was made up of very secretive, often scary individuals. To give you an idea of how tough it was to get your hands on music, I can tell you that no record store sold anything heavier than Def Leppard. Perhaps the greatest source for metal music, a small record store (the size of closet, if you can call that a store) which was located downtown (over an hour away by bus for my brother and I) sold Betamax copies of bootleg videos and tapes of albums. Upon paying a ridiculous sum of money, you would be able to pick up your copy of the tape as late as a month after. Oftentimes, you never got your tape, and ended up paying the very same guy who had just ripped you off for yet another tape.

Why do I tell you all this? Because I'm about to tell you that the first major metal concert I went to was by none other than Quiet Riot....and I want to give you some context so that you don't laugh at me for too long. 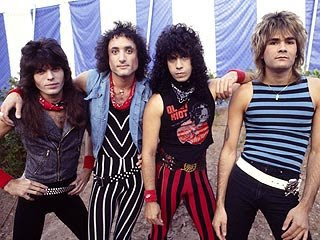 Looks like these guys owned a ton of sock in the mill that produced striped fabrics.

Right now, you're probably saying to yourself: "What? I thought this was a blog about metal? Quiet Riot? What?" Believe me, I understand your point. But what I'm asking you to trust me on, is that even though most of us were well aware of bands like Cryptic Slaughter, Venom, Whiplash, Celtic Frost and Tankard back then, the idea of a big time band coming to our lowly country was a huge event. This was even true if the band was weak and sucked. We knew they sucked. By early 1989, Quiet Riot were washed up...even for Quiet Riot standards, and thus they ended up playing some shows in South America to pay for their rent. What in other countries would not have even been news, became a huge deal in our backwards corner of the universe. Like a monkey who drinks its own urine due to a lack of fresh water, my brother and I went to the show to see Quiet Riot, all as a result of not having access to "real" bands.


The concert took place in a large arena, with a pretty good local band opening up. The opening band sounded a bit like Maiden, and we were all pretty excited about that. My brother and I were young, and my mom was way cool, so she went with us. The show took place on Ash Wednesday (hence the image at the top). South America being a wildly catholic part of the planet, nearly every single person at the concert (about 10,000 in attendance) had the cross given to them by a priest on their forehead. This may not seem like a big deal to you, but when you consider that many dudes at the concert kinda' looked like this (see below) it was certainly kinda' funny. 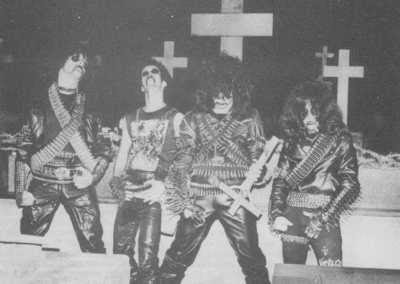 No matter how metal, South Americans know that if they don't get their cross on ash wednesday, their mom will kill them. Luckily, my mom was cool and didn't care that we didn't go get one. We never did, and we never went to church, an absolute oddity for south american standards.

In retrospect, its weird to think that one of my first experiences with heavy live music for me was Quiet Riot. I saw many bands play live before that, some great ones, but they're not worth discussing in a metal blog. So, I'm a bit embarrassed about all this, but I ask you to take into account that the time and place where this happened was and is very different from the environment most of us call home today, and very different from what most of you called home growing up. Had I been able to, I would have surely seen some sick bands around then...but none were around. Thus, like the monkey, I drank urine instead of water. You may think I'm stretching the truth a bit when I tell you it was cool to go see Quiet Riot, but believe me when I tell you that a few other thousand metal dudes, some rocking Sodom shirts and bullet belts, were there with me. And we all loved it. That was then. Today, I am a different man. In fact, here's a picture of me at a recent metal fest.