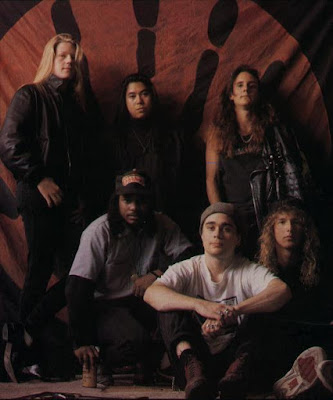 Mark this day in your calendar. Today is the day that Metal Inquisition has arrived. Well, the actual day happened sometime ago...but it was only today that we became aware of it. What am I talking about? I'm talking about the fact that the band Mordred's official blog is aware of our existence...and they are also aware of how insanely bad we think they are as a band. The post on their blog is a reaction to this post here at M.I. You can read their reaction here, or just read below. From their blog:

Now, I'm not one to post negative stuff about the band, past or present, but I've recently been sent a link from Mordred fan Ian Crocker, and am hoping that all Mordred fans will bombard the idiot's who printed the pointless article. Basically, it's a complete slag-off of Mordred, lacking understanding of the music and also tends to get a little personal, so if anyone out there in Mordred land wants to email these bunch of time-wasting cocks, get on board. I've been open to posting bads reviews etc, but this is just a joke.

Reading their take on my post, I went back and re-read my Thanksgiving Day masterpiece. By Metal Inquisition standards, the post was rather tame actually, but did feature some real zingers (if you allow me to give myself some credit.) But really, how could I not have been that brutal on Mordred? How could I pass that opportunity up? I mean, it's THEIR fault for sucking in such an unusual and groundbreaking way. If they had sucked as other bands did (like Heathen, Toxic or Gammacide) I would have pass them up for my Thanksgiving Day post. Flaunting your sucking abilities in front of me by putting out horrible music, and doing terrible interviews....it's like leaving an unlocked Rolls Royce Phantom with the keys in the ignition in front of a crackhouse, and then being surprised when you find out it's gone.

Perhaps the thing I love the most is that the guy's angry response includes a plea for their fans to email us, and respond in some way. As of today, there are no responses on their blog, or ours from fans. We have also not received a single email about this. Apparently, the three relatives that bought their records are no longer fans. Bummer. By the way, this is a picture of the guy who writes and takes care of their blog. No, I'm not kidding. This is really the guy: 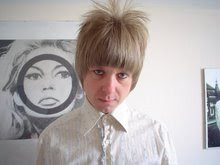 Seeing a picture of this guy, is like seeing a rare bird in its natural habitat. His plumage alone is majestic! And look at that fancy shirt! It's as though four or five horrible fashion trends collided to create this gender-neutral beast. If his hair were black, I would almost be forced to use our beloved "elegant gothic aristocrat" label. See, to all of us who live in the western part of this planet, all British people seem aristocratic, particularly when they shop at the same wig store as Phil Spector. Okay, I will merely say this: Mr Mordred blog guy: the entire albino community of aristrocratic douchelords called. They want their wig back.Let's all celebrate this huge occasion by watching Mordered's idiotic take on music, race and culture once again. This video never gets old.