From Spain with love (Part 1) 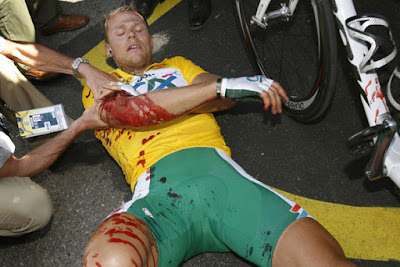 Put aside you preconceived notions about men with shaved legs and spandex shorts for a minute. Look, this is a sport where a Norwegian guy named Thor bleeds all over himself as though he were doing a photo shoot for a Mayhem album cover. Not bad, not bad at all.

You see, we are going to Europe for a much cooler reason. We are going so that we can watch the Tour De France live and in person, as it makes it's way through northeast Spain and Andorra for a few days. What could be more metal than that? (Please don't answer that question.) Although it's tempting, I'm not going to bore you with more details about the trip and my extreme excitement about the whole thing. While perhaps it would be cooler to go to Belgium to see the spring classics, this was an opportunity that presented itself and had to be taken. In order to not focus on cycling, and because our marketing department has determined that all posts relating to sports must be about cricket (due to the international nature of our readership), I will instead write about what Spain has to offer in the realm of metal. Oh, and for any of you that live in Spain, if you manage to spot us in the huge crowds, simply say the magic password and you'll get a prize. The magic password/phrase is:

"M.O.D. was both derivative and self referential in a post-modern sense"

If you successfully spot us, and deliver this line verbatim, you will win one of my most highly prized metal possessions....my cassette of Benediction's "meh" inducing "Subconscious Terror" album. 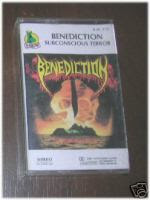 Before I move on to the primary content of this piece, allow me to make one final point about cycling being metal. Look for yourself, and tell me that the picture of Thor Hushovd wouldn't make for a pretty good black metal album cover. Check it out, side by side with an actual Mayhem cover. 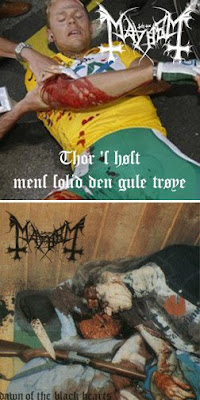 Not too bad huh? Aside from the bright green bib shorts, I think it's pretty good. I mean, you can also argue about the fact that he's wearing a yellow jersey...but hey...Dead was wearing a white "I Love Transylvania" shirt when this picture was taken...so it all evens out. By the way, if you're wondering what the white text says, it's a phrase I ran through one of those online translators. The name of the brutal album would be: "Thor falls while wearing the yellow jersey". Look, when you know what it says, it's not that evil...but just looking at it...it works. *


* Leave it up to me to spend like six minutes in Photoshop in order to make a joke about Mayhem and Thor Hushovd that a grand total of two people worldwide will really get. Ehhh.


Okay, with these formalities out of the way, let's move on to taking a closer look at Spain's offerings in the realm of metal. Enjoy. 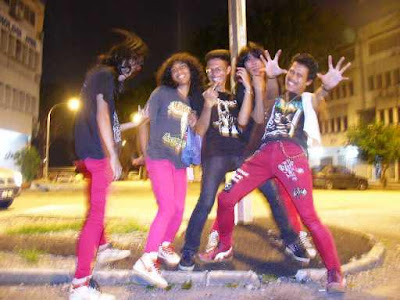 I don't care where you live, I don't care what type of metal you're into...I think we can ALL agree about one thing: nothing says "extreme metal brutality" like three pairs of fuchsia jeans in one picture. While American fans are barely trying when it comes to their attire, dudes in Spain are rocking jeans in colors that are rarely seen in nature, let alone in clothing. Take that American fuckers! 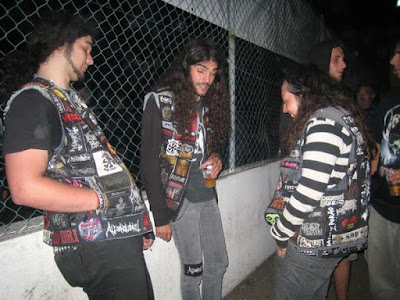 Spain has really weird traditions. You've probably heard about the running of the bulls in Pamplona, perhaps you also know about the Tomatina festival. A lesser known festival from Spain takes place once a year in San Sebastian. In that celebration, metal fans from throughout the region gather to discuss the validity of Destruction's early recordings for hours upon hours, to see who the last man standing will be. Slowly, lesser competitors fall asleep as they talk, leaving behind the lone "Campeon De Destruction" who will hold his title for one full year. If you thought going to Pamplona and getting gorged by a bull straight into your rectum was painful, you should try listening to these guys talk about Infernal Overkill for eighteen hours straight. 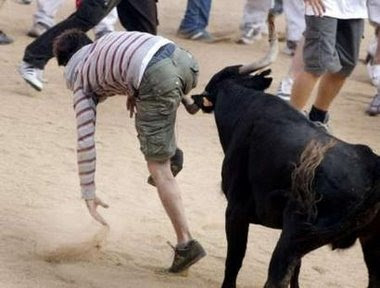 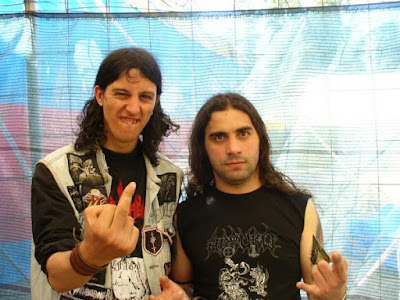 Spanish lesson for today: How to say "Dan Lilker has super creepy, tiny baby teeth, and so does this guy" 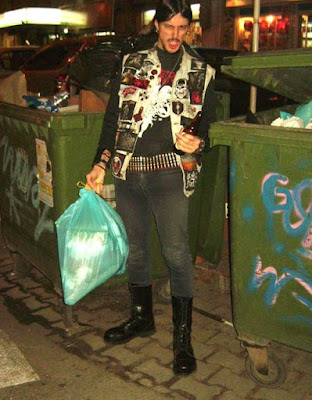 In some parts of Europe, it's common for semi-grown men to still live with their parents. The upside of this arrangment? Free rent, and the fact that your mom will wash your jean vest (taking extra care to make sure that your Sarcofago patch doesn't come off in the wash.) The downside? Mom makes you take out the garbage when you're in full metal uniform. What's a metal fan to do when confronted with such an inconvenience? If you're like this guy, you see metal opportunities where others see obstacles. Don't let chores slow you down, rock those fucking chores! Take out that fucking garbage. Metal, and metal attitude should never take a holiday. Just look at this guy and learn, this fucker could make yard work look metal.

Some have said that the Catholic church is too powerful in Spain, and that as a result homophobia is on the rise. I disagree. When you see flagrant displays of homosexuality such as the ones by the singer of Angeles Del Infierno, you have to applaud the church's changing views as well as their leniant policies. 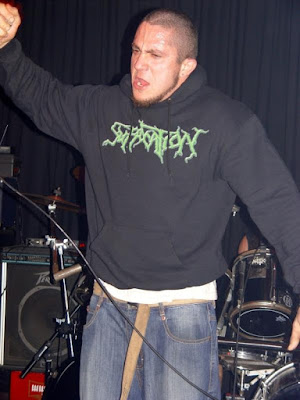 Quiet down class, please quiet down. Our Spanish lesson for today is the following, repeat after me class: "El Wigger-o Slam-o" 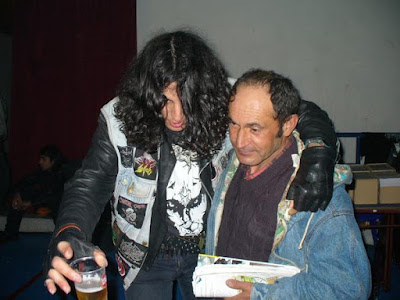 Son:
"No Papi, that's not what I'm saying at all...I'm saying that Baron Rojo and other bands from Spain are valid, but Sarcofago and Vulcano were lightyears ahead of their time, you know? Also, Beherit merely used that sound and that type of production as a crutch, so I don't know that their contributions were valid at all." 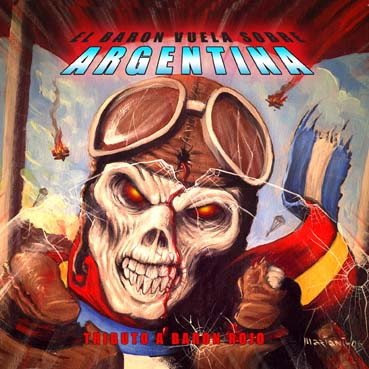 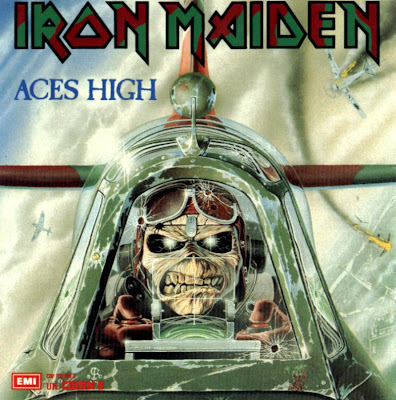 
* Top image is of a tribute record of bands from Argentina, covering Baron Rojo, who are from Spain. 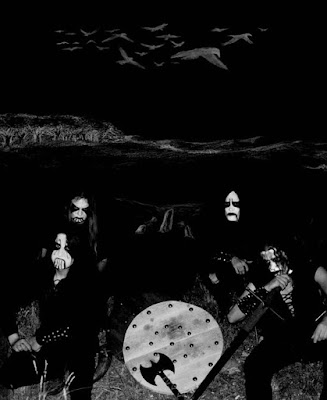 "So I was thinking, we can use my sister's drawing at the top of the picture...we can just photoshop it in there. Juan, you can make a wooden manhole cover, just remember to glue some bottle caps on it....what else, what else. Oh yeah, I just remembered. It would be super awesome if we had a shadowy rendering of the Enterprise kinda' like behind us, it would add a grim, outespsace kinda' feel to the picture." 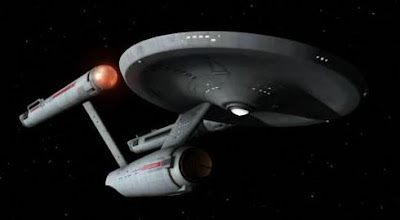 More to come next Friday.
Posted by Klaus at 1:00 AM