The beauty and innocence of youth: Memories of outdoor shows in the early 90s 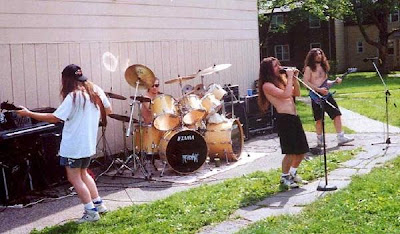 Two weeks ago, this amazing picture of New Jersey's Revenant was posted here at Metal Inquisition. To say that I love this image would be a severe understatement. I mean, many have tried to encapsulate the youthful abandon that permeated early 90s death metal, but few images have done it as succinctly as this picture. What, I ask you, is more metal than playing the Fourth Of July picnic at your apartment complex? The varying heights of their hi-tops, the varying shortnesses of their shorts, the varying degrees of shirtlessness upon their chests. If you were there during those years, you understand why this image is so great. This is what it was like back in the early 90s, and if you missed it...you missed it. Death metal was new, china cymbals were huge, and Morrisound Studios reigned supreme. 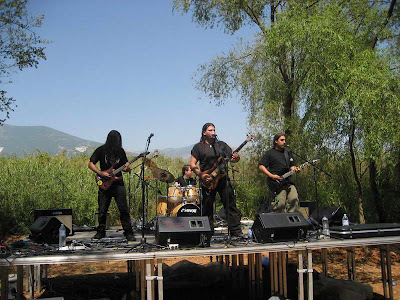 A sweet outdoor show in Italy, with an audience made up of no one...because the picture was taken with a tripod and a timer. This picture, by the way, officially started the musical genre known as "small amp metal". In short, this musical style can only be played with small practice amps, and is at its best when the stage the band is playing in is at least twice the height of the tallest amp.

During my reign as drummer of a handful of so-so bands in the early 90's, I played a few outdoor shows...just like the one pictured above. The band I played the most with was more of a grindcore band, but our shows were almost exclusively with death and speed metal bands. As a drummer, these shows were particularly frustrating, since grass is pretty much the worst surface on which your drumset can sit as you attempt to rip a brutal blast beat. As my drumset rocked back and forth, the cymbal stands dug into the soft grass, and you suddenly realized that you were engaged in battle with nature. Luckily, the bands I was in never attempted to seem evil, so when my cymbals toppled over onto the flower beds in front of the drumset, I probably looked less stupid than the death metal bands who would play after us. They, I have to tell you, looked seriously stupid. Have you ever seen a dude growl "Our next song is about a brutal serial killer...and its called..." into a mic, while standing on grass, at 2 in the afternoon, and a fly starts buzzing around his stinky hair? By comparison, we looked downright presentable and cool. Which reminds me, at one such show, a local band who we despised introduced one song by saying the following:

"This next song is about a cannibal who eats people"

Hmmm. As opposed to a cannibal who eats what? Tofu? By definition, a cannibal eats people, no? But anyway, I'm getting off track here.Out of the handful of outdoor shows (in reality, they were more like "backyard shows") that I played in during the early 90s, one surely sticks out in my mind above all others. Imagine, if you will, driving to a remote and rural location in the midwest...a town that was little more than a conglomeration of homes and had just recently gotten its very first stoplight. Then imagine a flatbed trailer, like from an 18-wheeler, with bands playing on top of it while it's parked in the middle of a depressing field. Billed as a "metal fest", the show was merely six bands and an audience of about 40 people. If you're a math genius like me, you can probably figure out that most of the audience was actually made up of the other bands. Depressing, I know. 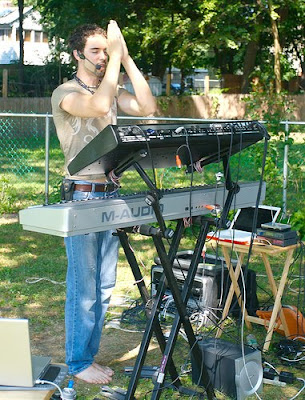 Not happy with the fact that only horrible metal bands were getting to play outdoors, pseudo-prog bands have recently started to get in on the action. Here we see a prog band's singer and keyboard player praying that his parents don't come home early and yell at him for using all the extension cords.

It was one of the first shows that our band had played, so we set up a boombox in front of the stage to record our set. On the drive back home, I remember listening to the tape in my brother's car. Quickly we realized that two stoned Pantera fans had been standing by our beloved Panasonic boombox during the whole set, and endlessly did their horrible Bevis and Butthead impressions into it's tiny microphone. As a result, what we ended up with was a thirty minute tape of two rural jerkoffs with no teeth testing out their comedic chops onto our boombox. I remember what they looked like, slightly overweight and with nearly identical Vulgar Display Of Power shirts. The fact that they were only missing a few teeth, made them stand well above the rest of the audience, most of whom had even fewer teeth, and the few they had were dark brown. This, I would later learn, was partially as a result of drinking water pumped from wells, which lacks fluoride. 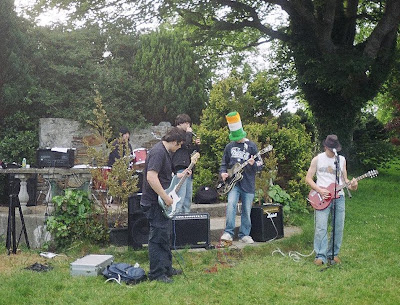 Outdoor shows in empty fields and backyards during the 90's would sometimes bring out bands who were barely metal at all. Like a community college who will let anyone in, backyard shows sometimes had bills with bands totaling well into the double digits. Inevitably, at least one band would feature a guy in a Dr Seus hat who was more than ready to use his wah-wah pedal for every song. Another interesting note about outdoor shows during that time: apparently no one was allowed to use anything other than small practice amps with 10" speakers.


You know how sometimes people talk about the "good old days"? When they do, all I can think about is that "fest". I remember standing in the hot sun for hours, playing on top of a trailer, watching fat dudes get drunk and turn their back on the makeshift stage as we played, so they could light off firecrackers in order to throw them in to the neighboring cornfield.

So why did I suddenly remember this less than memorable "fest"? Well, it's all because of the Revenant picture above, but also because of the videos below. The first video features an outdoor performance, but also the typical dude who is getting down, not realizing that he's really taking away from the "evil" atmosphere that the music is trying to convey. We had a few guys like this at our shows...one particularly memorable one was an elderly black man in a suit and tie who suddenly decided to take his tie off and wrap it around his head as he danced around like a six year old ballerina at a recital. His suggestive gyrating dancing is a sight I wont soon forget.

The second video reminds of this era because of the sheer number of bands that were this bad who I had the pleasure of sharing a bill with. Outdoor shows were particularly attractive to these types of bands. If at first you think they sound okay, keep watching...and wait until the singer starts. Thanks to the reader who sent this in.


This dude knows how to GET DOWN!


Although this show is taking place indoors, the musical quality is indicative of many small-amp/outdoor metal bands. Is this guy the greatest metal vocalist ever? Do you even have to ask? I'm glad that the drummer has headphones on, so he can play perfectly on time thanks to his click track.


A classic that we've posted before. Certainly worth checking out again.


Reader submission. Sometimes the show is not on stage at all...check out the dude dancing.