Thanks to the feedback for the first post of 'When Weed And Metal Goes Wrong'! There were some good ideas, additional mentions of metal failing at the topic of weed, and other discussion. If you missed the inaugural post, check it out HERE.

Again, like mentioned in the first post, most of the time weed and metal is a great combo, however, when you fuck it up, you fuck it up so bad that it’s laughable and/or sad. I’ve also foregone the “traditional” metal/stoner bands cause that’s just like shooting fish in a barrel.

For the second installment of 'WWAMGW' I'm gonna expand the boundaries a bit further than just rattle off bad metal songs about marijuana. For starters, a few readers mentioned Pantera in the first post which piqued my curiosity because off the top of my head I couldn't think of an overtly "weed" song that Pantera had written. Where did this connection come from? I searched through lyrics and album art and couldn't find any solid leads. In fact, I was surprised that Far Beyond Driven only mentions 'dope' a couple times and the word 'smoke' three times throughout the whole album - WTF?! Where was the Pantera-Weed connection? Coming up empty handed, I think I’ve finally found the culprit connecting the band to weed, quite simply: their merchandise. Talk about great branding! Rarely mentioned in song at all, the band earned their weed-loving rep through various pot-leaf emblazoned (huge pun there, sorry, had to) merchandise items like these: 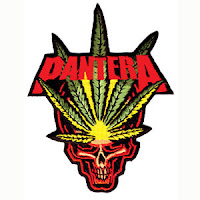 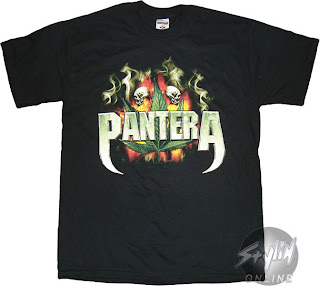 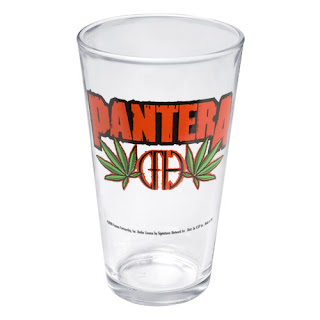 Seriously, you can do a socio-marketing study on this phenomenon. However, like mentioned in the first post when referencing Black Label Society's fanbase (ie. predominantly trashy, with redneck tendencies and a love for Hot Topic and headshops) I think their fanbase saw the merch and sunk their teeth in deep. In short, it's impressive to see a band never pen a song about weed, rarely mention it in song, and yet become synonymous with marijuana. I'm not sure if I should give kudos or sympathy?

Moving right along… For better or worse, I've always had a soft spot for Fear Factory, I’m sure much to the chagrin of many readers. Strangely enough it was their much-overlooked EP Fear Is The Mindkiller that I first heard from the band sometime in '93.

(The nu-metal-odometer was broke that day)

My interest in the band tapered off right around Obsolete, but the deathblow came right around that time when there was a "supergroup" of sorts that featured Christian (bass) and Raymond (drums) of Fear Factory along with Stef, the guitarist from the Deftones, and B-Real of Cypress Hill fame. The name of this group: Kush. Yep, named after a strain of marijuana. This is such a bad name it rivals the lame band Dope (who got a good reaming in the first WWAMGW post) - in fact, I'm curious to hear which name readers think is the worse of the two? Please comment below. Not quite as overt as Cannibis Corpse and their hilarious song titles, but still having song titles like "Light It Up" the group is clearly a force to be reckoned with amongst highschoolers dipping their toe into the rap-metal water. In retrospect, there WAS some foreshadowing when Fear Factory's remix album "Remanufacture" had a short instrumental song titled 'Bionic Chronic' which seemed so outta nowhere (and out of character for the band) that I'm sure I wasn't the only person thinking something wasn’t quite right in the FF camp. In any event, so far God has fortunately jumped on the grenade and Kush hasn't put out a record (their debut was supposed to surface in '03), but I still wait with fear and baited breath... 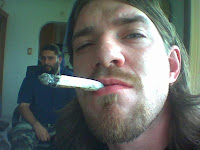 Mentioning the Deftones does bring up a more pressing offense by the band (and I LIKE the Deftones): they're playing this year's 2009 Smokeout Festival next month with Slipknot. Double ouch! This is a real life example of the critical moment where weed infects metal in a bad way. You see, other bands playing this festival are acts like Kottonmouth Kings, Sublime, etc. and it’s hosted by Cheech and Chong. You can imagine the legions of mall dirt that will be in attendance. They should get Jnco to sponsor this fest, have booths for henna tattoos and dirty do-it-yourself dread locks and just call it ‘Dirty Crusty Burn-Out Fest’. 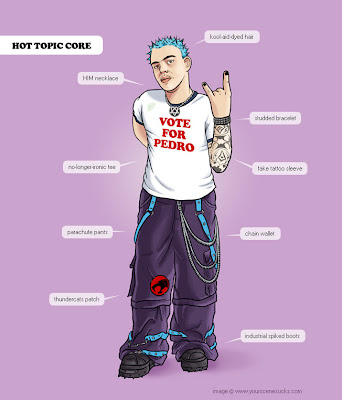 However, this edition of WWAMGW would be remiss without SOME mention of metal“fumbling the pass” when it comes to weed. So, without further ado, here are this post's contenders: 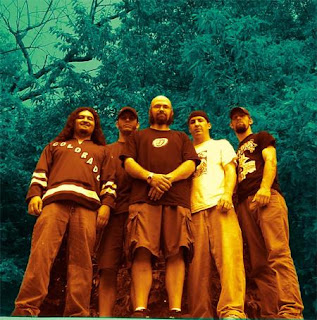 Cephalic Carnage - 'Kill For Weed' (From the Anomalies album)

I have to qualify this by saying: I love Cephalic Carnage. I think they're great, they're cool dudes and they all shred at their instruments. It pains me to write them up like this (much like Brujeria in the first post) but I have to mention this song cause it seriously made me laugh out loud. Truth be told, I think this song is awesome. I love the brazen, ridiculous concept of "killing for weed" cause that shit is just so plain extreme you have to - whether you like it or not - begrudgingly respect it cause they go there. The music is sweet, and the lyrics ain't too bad either UNTIL you get to the last few lines vocalist Lenzig bursts out and the song’s coolness is almost undone. In short, the song talks about how cops are fucked up, they'll tear your house apart looking for weed, the system is fucked up, weed should be legalized and how he kills to stop the cop mistreatment... sounds all good right? That is, until the last few lines where he says:

"This is a song about a schizophrenic,

I met on the street,

Told me how he killed for weed"

I thought my head spun around like in the exorcist in a true WTF moment? Did he just answer an interview question within the context of a song? Let me explain, those lyrics are actually IN the song ABOUT the song they are in and not just a liner note explanation. Talk about utter hilarity in some weird twist of circular logic. He might as well have said, "By the way, this song is based on a true story of my encounter with a mentally handicapped derelict, the names have been changed to protect..." except SUNG in the song as part of the song (in death metal vocals no less). Wait, maybe I should give them a pass for originality and good use of narrative dialog? 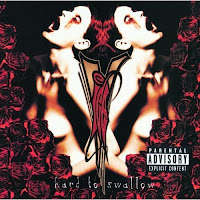 Vanillia Ice - 'Zig Zag Stories' (From the Hard To Swallow album) I know this might seem like I'm throwing a ringer out there from the get-go since this is Vanilla Ice, but hear me out. From a musical perspective, I really enjoy this record. Yes, I can hear you in the back decry how Ross Robinson (aka nu-metal producer extraordinaire) recorded this record - guess what: it's a musically inventive album (especially amongst the nu-metal glut when in came out in '98) with effects, layers and loops providing interesting textures and sounds (and you'll probably give silly nu-metal experimenter Tom Morello a pass for street cred and the status quo - lame). Rather than sit here and write a book about how Vanilla Ice's stylistic shift is already in its 12th incarnation of morbid self-impersonating sarcasm, let's just say I think it's a good record, BUT not without it's butchering of the topic of marijuana. Check out this lyrical except:

"...To blaze up a sac of that green bombay

And when I reach my peak, I explode like Dante

Tha ganjay has got my mind wide open, I'm soakin'

In the music, I use it, and don't abuse it

And true, it gets me high like the sky

I will buy 'till the day that I die

You ain't gotta ask me why

I take tokes from the smoke, I can't deny

Got a lifetime supply

And I wanna get you high"

I rest my case. 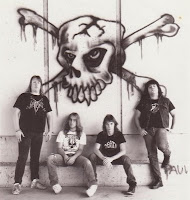 Before wrapping up, though, I also wanted to give a couple of honorable mentions. Firstly, thanks to SaveTheCirclePit for pointing out Sacred Reich's song ‘Ask Ed’ for the great lyrics:

Hit the fridge have a little snack

Grab the paper see whats on the tube

Stretch out and smoke a fat dube”

I thought the term dube went out in about '76, but the ‘Reich is reppin' it hard twenty years later! Also, an honorable mention shout-out to Decrepit Birth's Diminishing Between Worlds album. I stumbled across their lyrical delivery recently with great interest. They've somehow managed to write an album where the lyrics read like singer Bill Robinson is stoned to the bejeebus (say that like Bill Murray in Caddyshack). We're talking meta-physics, astral projection, multi-dimensions, etc. He accomplishes ALL of this without any mention of 'weed', 'smoke', 'marijuana' or any other drug-related connotations - good work and tip of the cap to you sir!

If you have ideas for future “WWAMGW” songs to discuss, let me know. The next edition may flip the script for a bizzaro post of ‘When Weed And Metal Goes RIGHT’! So stay tuned.