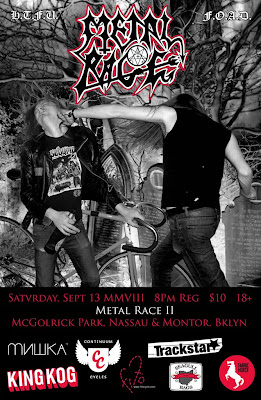 If you've been down with metal long enough, you've come to expect the appropriation of its aesthetics. You can almost set your clock by it. As of late, however, a new type of appropriation has come to my attention...not that by large companies, publications or fashion designers, no. I'm talking about the use of iconography from the world of metal by other subcultures, all in the spirit of irony. Yes, some of the people who do this claim to have street cred, but I've checked and it's very seldom true.

I'm not going to dwell too much on the subject of subcultural irony (because I'm wearing a dry clean only sweater today, and if I start going down the path of "irony" I'll throw up all over myself in disgust), but I find this interesting. Why? Because to me, if you use iconography from another subculture in an ironic fashion, you are in a sense indicating the superiority of your culture over that which you are appropriating. It's clearly done in a mocking fashion.

Remember way back when hipsters started to wear mesh trucker hats? Clearly, the intended message was that a well educated white kid was slumming by putting on such wacky attire. Facial hair, and mullets soon followed, then hi-tops. So, now that metal is being used ironically all over the place (partially as part of 80s and 90s culture revival, which is now considered "old school") only one question remains:

Where does metal rank in the world of subcultures? According to the poster above, cycling/bike messenger culture ranks over metal. But that, perhaps, is merely because metal usually lacks a sense of humor and seldom uses irony. Metal is concerned only with evil/dark/serious imagery and messages. As a result, it gets beaten to a pulp in the subculture playground. Metal is also not self aware. An obvious giveaway about how fake many of today's Headbanger's Ball-grade metal bands is that they think the very music they play is funny. They are self aware, and thus not metal. What that argument says about this blog, I don't know. And I don't want to discuss that. Because we're hella metal. Anyway, a real metal band would never have a poster, record cover or lyrics with any sense of irony or attempt at humor. Yes, Sacred Reich had that song about how they listen to Red Hot Chili Peppers, and Anthrax had I'm the Man...but those songs sucked and were un-metal. Yes, grindcore and other sub genres flirted with humor...but you wouldn't see a poster for a real death metal fest in Kentucky with characters from Saved By The Bell or something....though AC Slater was a dope drummer, and could probably play some tight blasts.