The games we play

Last week's post about the highly influential Nocturnus album The Key, prompted a good bit of discussion about video games by our readers. Having never really played video games in my life, I chose to look at a different kind of game. You see, at a recent Metal Inquisition retreat, the topic of different metal-related games came up. I'm not talking about sports either (we discussed that in an earlier post here), I'm talking about fun games...simple activities that help pass the time. In this post, I will let you into the Metal Inquisition inner circle, and share with you just some of the activities that M.I. staffers partake in to pass the time. 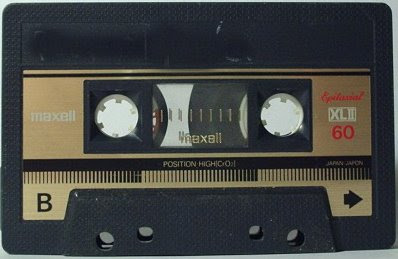 Origin
This game was first developed by Mr. Gene Hoglan's Balls and my brother SkullKrusher, while driving to one of the Metal Inquisition retreats.

How is it played?
Go through a box of your old stuff, perhaps the glove compartment in your car, or inside your old walkman. You should be able to find an old mix tape that you made for yourself, or that a fellow metal fan made for you. Throw out any information you may have about the tape's contents. On a long drive, listen to the tape (this requires that your car have a tape player...sorry, it's the one tough thing about the game) and try to figure out the bands that are on the tape. When this game was first played, the tape was titled "Absolute Insanity", and was made by Mr Gene Hoglan's Balls for himself during his high school years. The tape featured mostly Nuclear Blast bands, and both staffers competing had trouble naming any of the bands on the tape. Try it for yourself! 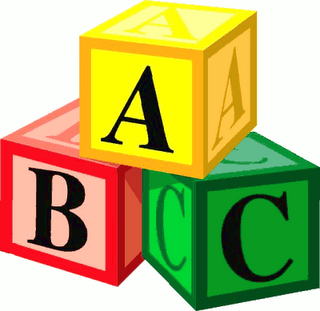 Origin
Mr. SkullKrusher and I were in a band for the better part of the 90's. As bad as playing horrible shows was, driving six hours to play those shows was even worse. This was back in the era before cell phones, laptops or most other forms of entertainment that many of us use to pass the time during travel these days. As a result of our boredom we began to play the Band Name Game, in order to help pass the time.

How is it played?
This is a simple game. Go down the alphabet, and name a band that starts with each letter. You can play it so that everyone has to name a band with the letter A, and then B in the next round. You can also start with the letter A, and the next person has to name one with B. This second approach works way better. This game is best saved for long drives, especially if you are surrounded by metal heavy weights that know tons and tons of bands.
A tip of the hat to the all-time champion at this game, who is sadly no longer with us. Mr. Cook, wherever you are...you always beat our asses at this game. Cheers.

Rules
As someone who played this game for way too many hours, let me tell you a few things that you must keep in mind. Set some ground rules before you begin playing to avoid arguments.

1.
If you are playing with all metal bands, set the standard for what "metal" means. Do NWOBHM bands count? Will you count bands like Black Sabbath? Will you only count bands that are heavier than Slayer? Does D.R.I. count as metal? Decide these things first to set some perimeters.

2.
Remember that at least one other person must be able to verify the existence of a band for it to count. None of that "oh, they put out a demo in '92...I think they're from Turkey. It's not my fault you guys are posers and don't know about them" nonsense.

3. Band names that have been used multiple times only count once. For example, yes there are multiple bands named Poison, Slaughter etc. Adding their country of origin doesn't make them count twice. Don't be a wiseguy. Yes, there were two bands called Nausea. It only counts once..and the New York one would only count if you were playing the game using the names of boring crusty punk bands anyway.

4. A band with a name preceded by "The" cannot be used for the letter T. Duh.

5. Decide if band names that are made up of numbers, or start with numbers will count as the letter the first number it starts with. This will avoid huge fights down the line.


Tips
The letter Q is a bitch. As someone who has played this game for way too many hours, I can tell you that Q is where everyone looses. Stock up on bands that start with Q. Also, if you own that book with the names of metal bands, you are an idiot anyway...so you shouldn't play anyway. 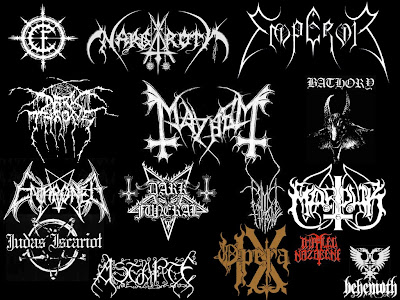 Origin
My brother and I have been playing this logo off and on for many years. It's sometimes fun to rope in people with minimal artistic talent, so feel free to play with family and friends. This game can be played in restaurants while you wait for your food, or during meetings at work, if you are lucky enough to work with a fellow metal fan.

How is it played?
Come up with a stupid word or a combination of words, something like "custard", or "elastic band", or maybe "chicken soup", now design a sick metal logo for it. Note that almost everyone begins to default to a Napalm Death scrawl style, or a black metal upsidedown cross style. Either is fine. Determine a winner after each round.

Tips
Keep your logos. Imagine going over these ridiculous logos ten years from now with your friend. Also, write the word that the logo is for at the top, since most of these will be unreadable anyway. 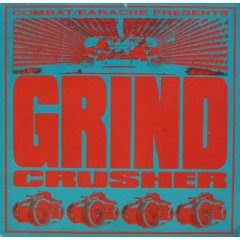 Origin
Mr Gene Hoglan's Balls and I were picking up ex-poster Awakening at the airport. GHB said we needed like an hour to get the airport, and he was wrong. Way wrong. We got there with about 50 minutes to spare. Not wanting to pay for parking, we chose to drive in circles around the airport at high speeds instead. With nothing to listen to but a tape of the Grindcrusher comp, the game was born.

How is it played?
Easy. Play the Grindcrusher comp when surrounded by your aging metal friends, and try to name the bands as they come on. Yes, Morbid Angel, Nocturnus and the like are easy...but some are actually pretty damn hard to name. Try it! Call me a poser, but I had a tough time spotting the Mighty Force song. Mr. GHB also claims I had trouble with the Terrorizer song...but that's simply not true. I was being careful, and taking my time before yelling out the band name. Damn. 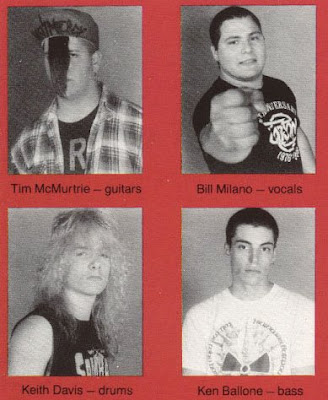 Origin
Not sure exactly where this one came from originally, as it has been played casually around the M.I. offices for some time. It was first played formally (if only briefly) only weeks ago at one of our retreats, as a team-building exercise.

How is it played?
Pick a classic metal recording, something amazing, something that has real historical significance...something by M.O.D. let's say. Without looking at the album, try to remember the shirts that all band members are wearing. If the album features multiple band shots, first establish which picture/s you are going to play for.

Tips
Some good albums to play with are Terrorizer's "World Downfall", Napalm Death's "Mentally Murdered" (double points to the person that can say what two members are wearing the same shirt...what a metal fashion faux pas!) 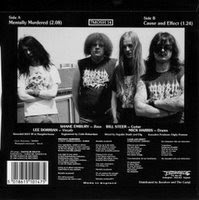 Lesser games that are still worth mentioning:

Terrorizer thanks list game, where players have to compete to see who can remember the most people and bands thanked in the Terrorizer thanks list. A word of advice: if you ever play this with any of us...we won't be impressed by the fact that you know that NWA and ENT are in there. It takes a good bit more to impress us.

Thanks/No Thanks game, this is one that only some people can get into. If you are the kind who likes to put a bet down on the Superbowl's coin toss, or the over/under on an NCAA game...this one's for you. Try to remember if a certain classic thrash album has a "no thanks" list as well as the usual "thanks" list. Tip: Nuclear Assault were fond of "no thanks" lists. Tip #2: almost all "no thanks" lists included posers and Tipper Gore.

Morrisound Studios game, name recordings made at the famed Tampa studio, one at a time as you go around the room. First one who can't come up with one looses. Everyone else wins. This can also be played by naming recordings produced by Scott Burns or Alex Perialis. Easily transformed into a drinking game, if you are 15 years old that is.

Metallica's Black Album game, play the entire album from beginning to end...and try not to laugh once. This one is extremely hard to play.

Do our readers have similar games that they've played? If not, are we insane losers for thinking these up? Perhaps, perhaps.
Posted by Klaus at 1:03 AM