I never really paid attention to Mucky Pup back in the day, but reader Savage made a request in the comments of our earlier Nocturnus post, and if there is anything that defines us here at Metal Inquisition, it's customer service. In fact, at one of our innovation retreats in 2008, we rewrote our corporate vision statement as follows:

The mission of Metal Inquisition is to provide society with superior products and services by developing innovations and solutions that improve the quality of life and satisfy customer needs, and to provide bloggers with meaningful work and advancement opportunities, and investors with a superior rate of return.

With that in mind, we enter the bizarre and frightening world of Mucky Pup.

I don't really know a damn thing about this band other than that they have a dumb name and I never gave them a chance back in the day because of it. Also that some of them were in Dog Eat Dog, who I listened to a little bit.


U Stink But I Heart U
Apparently this song was their big break, and I actually vaguely remember it. I was a huge fan of the comic strip Bloom County when I was a kid, including the hair metal band Billy & The Boingers that featured Bill The Cat. The guy who created the comic strip held a contest in which he asked bands to record their version of Billy & The Boingers' hit song "U Stink But I Heart U." Mucky Pup's version won, and was included on a flexi that came with one of the Bloom County books (which I had).

I'm not exactly sure what it mean when your band's biggest accomplishment is winning a jokey contest from a comic strip, but it is safe to say that's Mucky Pup's biggest claim to fame. Maybe they can tell me why Sarge is always so mean to Beetle Bailey!! And for christ's sake, why can't Blondie let Dagwood enjoy a sandwich in his hammock with nagging him about chores?? Fucking bitch.

Hippies don't like water
Aside from "U Stink But I Heart U" I don't remember any other Mucky Pup songs, so I fired up Youtube and checked it out. WTF is this shit?! It makes Brokencyde seem dignified, respectable, and stylish! Then again, I have to remind myself that this was 1991 and things were very different back then. Hypercolor wasn't ironic, Living Color thought it was perfectly acceptable to wear Body Glove wetsuits on stage, and MDC had turned into the hardcore version of Weird Al (see "Tofu Spaghetti"). The Youtube description notes that MTV never aired this video... weird! I can't think of a single reason why they wouldn't air it 24/7!! 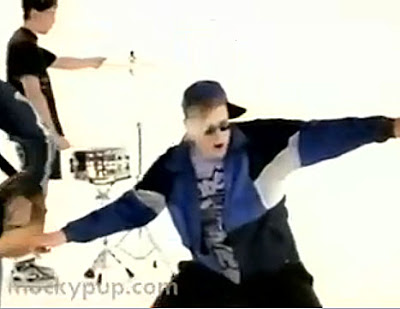 Ugh I don't even know what to say... 1000000x worse than Brokencyde!
Also, "hippies" were still a relevant part of the cultural lexicon, with bands like Enuf Z'Nuf blending really shitty hair metal with a particularly superficial, irritating take on the 60s. Apparently Mucky Pup did not like this, so they made a novelty song about it. I'd like to think of it as an abominable, cringeworthy combination of Ugly Kid Joe and Murphy's Law... only without the cool parts of Murphy's Law like hitting people with an 8 ball in a sock, and with more fatties.

It gets worse when the fatty starts skanking and you can see his enormous, pasty thighs shake like a bowl full of vanilla jello
From the perspective of someone writing this in 2009, it seems quaint and a little charming to complain about hippies like we did so vigorously back in the 80s and early 90s. And maybe it is a little naive, but it reminds me of my salad days. It makes me long for simpler times, before screamo crunk and beardos, before scene hair and one-man MySpace drum machine goregrind bands. I just want to put a Scatterbrain tape in my Walkman, put on my baja jacket, and go skateboard behind Safeway. Either that or go smoke weed on a rock in the woods and listen to Pantera. Instead, I have to do my taxes and write a proposal for market research on Crest toothpaste and I am listening to Lady Gaga. Sigh...

Mr. Hand
This song is about how the singer masturbates a lot, presumably because the ladies aren't checking for him. It is actually sort of catchy, once again in a "poor man's 'Crucial Barbeque'" kind of way. I probably would have thought it was pretty funny in 7th or 8th grade. But I also thought it was a really good idea to wear red sweatpants, a Forced Entry shirt, a Batman hat and puffy white high tops from K-Mart (the brand was "Jox") six days of the week.

Between his physique, wardrobe, and hair I have no idea why he isn't drowning in pussy
Apparently the world had a big appetite for comedy metal in the 90s, and one of the staples of the genre is wearing oversize, zany Dr. Suess hats. The drummer for a local comedy punk/metal band called Dumt wore one every fucking time they played and it made me want to kill him even though I loved Dumt a lot. Actually, I still do.

These hats fill me with rage in a way that very few things are capable of
The Dr. Suess hats remind of other early 90s fashion mishaps like those stripey tights that were so popular at Lollapalooza. I always wanted to fuck the art fag chicks in my 8th grade art class that wore Doc Martens with stripey tights and listened to Skinny Puppy and Alien Sex Fiend.

Anyway, this song is fucking terrible, I don't even have the patience to look on Rapidshit for a copy of their album (or albums... did they have more than one?). This is like the equivalent of playing old NES games for the first time. Maybe if it was 1988 you would have looked past their many obvious and serious flaws, but it is 2009 and this shit sucks by today's standards.


Dog Eat Dog - "No Fronts"
I guess some people from Mucky Pup were in Dog Eat Dog, but I'm not looking it up because I just want to be done writing about this awful shit. I used to listen to this band a bit, but I haven't heard them for years and they are much fucking worse than I remembered them being. Apparently they felt like they hadn't made big enough assholes of themselves in Mucky Pup and decided to start a new band in which they would do the most embarrassing shit possible, then record it onto a CD which they would sell.

Look at him rap aggressively into the fisheye lens! He's so angry/authentic!
Listening to this song for the first time in years, the main thing I noticed is how these are maybe the very worst lyrics I have ever heard, even surpassing Brokencyde's "hardcore shit make u feel the toxic" line. I will highlight the parts that make me cringe and vomit the most:

We come with the fat joints
To uplift the moods
Big up to people catchin' on this groove
This is Dog Eat Dog not a snitch or a snoop
I might chew a bone but don't call me pooch
We're not braggin - No
Are we laggin - Never
I can already see we got your tail waggin'
I could doggy bad ya
Or have you for lunch
The answer is no now - who fronts?

Alright kid what ya want ya get
S.G. Dog Eat Dog represent
You know the time so act like you know
Listen to the way this ill shit flow
We travel around all boro, any city
Some got beef but they wont get to me
If you come correct and your vibes are true
Peace to your crew
We're looking out for you

Holy fuck that was hard to bear, I seriously thought about smashing my monitor a few times just to make it stop. It's like a bunch of band geeks heard "Urban Discipline" and decided they wanted to give being tough a shot... only they added fucking trumpets to the mix, so it didn't work out so well. The video is full of the most annoying 90s cliches like flannels, fisheye shots, snowboards, and beanies. It's like a Saturday Night Live parody of post-Beastie Boys 90s culture, only it's all too real. Do not want.

Conclusion
I like Ugly Kid Joe and Murphy's Law better, fuck this band. Some things deserved to die with the 90s.
Posted by Anonymous at 1:00 AM