Dave Mustaine Interviewed By A Puppet 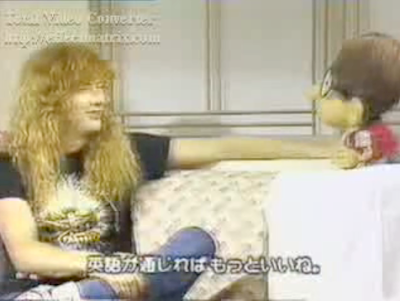 Mustaine being interviewed by a brainless creature. No, not Riki Rachtman. A puppet from a Japanese TV show.

The content of the interview may not be the funniest thing ever, but seeing Dave Mustaine keep a straight face while being interviewed by a godamned puppet on Japanese television is insanely funny. At least to me. Can you imagine how hard up you have to be for press, in order to to hear a guy from your label say "So, it's an interview show...but the interview is done by a paper mache puppet, doesn't that sound like a fun time?" and you actually agree to do it? This is yet another moment in metal history that ends up looking exactly like a bad SNL sketch.

Due to his tearful breakdown in the movie Some Kind Of Monster, we now know exactly what was going through his mind while this interview was taking place:

" Jesus, Lars is so rich right now that he's probably buying a mansion and getting himself new chiclet teeth. Kirk probably has enough in the bank already to try all kinds of experimental hair replacement methods...and I'm here being interviewed by a damn puppet. How embarrassing. Thank god that no computer network exists where people around the world will be able to watch this footage. This whole thing is between me, the puppet and Dave Ellefson. Hmmm...I hope to one day tell Lars how I really felt about being thrown out of the band. Thank god for the fact that the day that happens, it will be a private moment that won't be filmed for a major motion picture. At least I have that to look forward to, and to keep me from crying as I get interviewed by this creepy Asian puppet."