Metal Spokesmen: An Overview (Part 3 of 3) 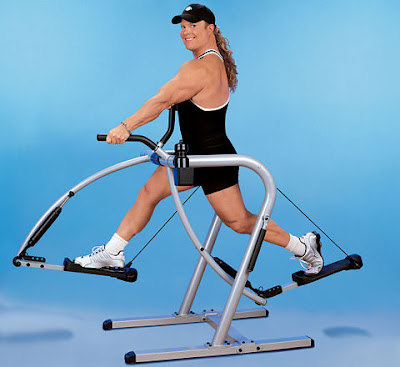 One of the most ebullient TV spokesmen, Tony Little has been a fixture in American television for decades, selling his exercise equipment while sporting his fantastic hat/pony tail combo. Though you may think someone like Tony Little probably has nothing to do with the world of metal, you'd be wrong. Read on, and you will see just how similar Manowar's spokesman is to Tony Little.

This is the final post of our three post series about spokesmen in the realm of metal. I'm sorry about the fact that it took three full posts, but there were simply way too many to put in one post. 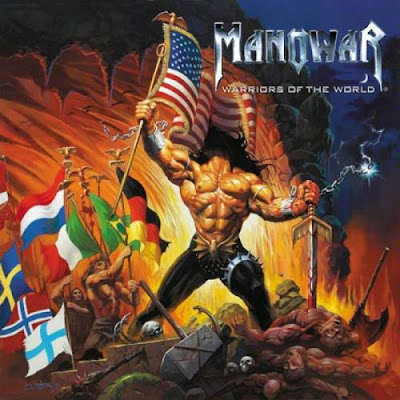 Largely based on He-Man action figures, Manowar's warrior is the pinnacle of homoeroticism in the world of metal, perhaps only beaten by those pictures of Manowar wearing furry armor. For some reason, Manowar's warrior enjoys wearing a spiked cockring around his leg, don't ask me why. Upstate New York is a fucked up place. 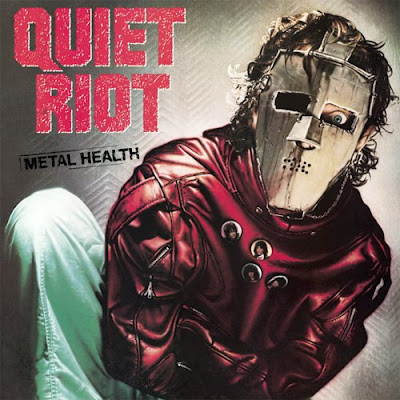 If I ever end up in a mental institution, I hope they give me a cool red leather straight jacket.
Though hardly metal, Quiet Riot also attempted to have a spokesperson. Their answer came in the shape of this crazy dude with a mask, who they used in multiple covers. Like Vic and Eddie, he was played by an actual person on their videos. I don't have much to say about this character, except that I highly doubt that mental health professionals would allow him to keep pins of his favorite band on his red leather straight jacket. Sorry, I can only suspend disbelief for so long. Oh, and one last thing. The pun in this album's name took me about ten years to get. I'm retarded. 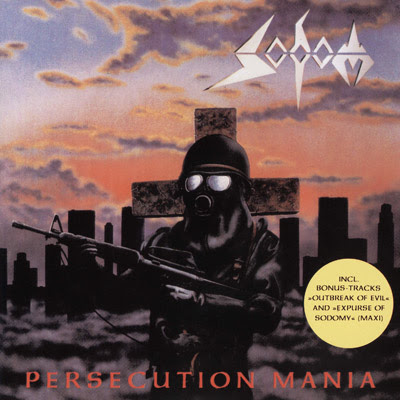 Somewhat related to Sacred Reich's masked surfer, Sodom's spokesmen was a faceless soldier with the standard issue gas mask. Again, what in the hell was the obsession with toxic waste and gas masks in the 80s? Aside from the fact that he was often drawn rather badly (on this cover, he looks like he's melting), the concept was strong and certainly set the mood. Another plus about this character is that he took our attention away from the Sodom logo, which looks like it was drawn by a drunk 5 year old. I know some people like the logo (the same idiots who like all those scrawny, asymmetrical black metal logos), but I don't care. You're all wrong. As a spokesperson, I picture this masked guy on the Home Shopping Network pitching the new Sodom album. Due to his mask, he'd be barely audible. Sales would plummet, and he'd be fired. He would be replaced by Sacred Reich's masked surfer who is currently out of work. 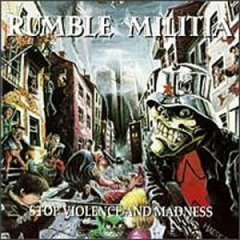 One of the lesser known spokesmen in the world of metal is Rumble Militia's helmet-wearing skull dude. Though the lyrical content in this album deals largely with concepts like racial equality and the like...these Germans seem pretty comfortable making their spokesman wear a godamned Nazi helmet. I don't get it. Yes, I noticed that he has a red star on the helmet and a red shirt with a star...but come on. My brother and I bought this tape in 1991 because the band was on Century Media. Boy were we let down. Aside from one rather poppy song that I've had stuck in my head ever since, the album is a pile of doo-doo. Still, you have to give them props for stepping up to the spokesperson arena and throwing their Nazi helmet into the ring. 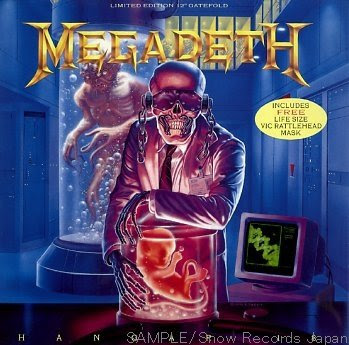 Oh my god, do you see the sticker on the cover of this single? It came with a free Vic mask? Holy crap! How badly do I want to fire up the Nocturnus time machine in order to go buy one of these!

Perhaps one of the best known metal spokesmen is Vic Rattlehead. He's also one of the few (if not the only) to have a last name. This is both a testament to Mustaine's stupidity and stubborness. Vic's last name is also the super-secret name under which Megadeth books itself to play incognito shows, Vic And The Rattleheads. Shhhh, don't tell anyone. It's a secret. Anyway, Vic is a jack of all trades. Like Eddie, he's extremely versatile and able to play a scientist, orchestra conductor, a zombie and so many other roles. Like Laaz Rockit's angry army guy, Vic has had the honor of coming to life in video form. In Hangar 18, he came to life as a dude wearing a mask and holding skeleton hands out of his sleeves. If you are interested in that video, you can enjoy my full review of it here. Vic was also seen in photographic depiction on the cover of So Far, So Good, So What. If you're going to ask me why Vic is on the moon on that cover (see the earth over his shoulder?), I have no idea. I also don't think that things like grenades would work on the moon, since I think they need air to explode. I've heard that you actually can shoot guns in the moon though...but whatever. The bigger question is: why are Vic's sunglasses riveted on? Why are the wires from his headphones chains? Are those headphones Ipod compatible? Vic gives us more questions than answers. Just like Megadeth, because I know when I heard their music, I always ask "who listens to this?" One last note, did you know that Dave Mustaine held a contest recently so that fans could redesign Vic? Oh, it's true. See the finalists here.

Labels: furry armor, homoerotic artwork, homoeroticism, megadeth, things i would buy if I had access to the Nocturnus time machine, things that come from horrible places like New Jersey and upstate New York