Signs of the times: Photographic evidence of my advancing age

An ongoing theme here at Metal Inquisition is that of getting older, and coming to terms with what that means. I've talked about my need to wear orthotics in the past, as well as my general confusion about the tastes of metal's younger generations. Today I bring you photographic proof of my advancing age. 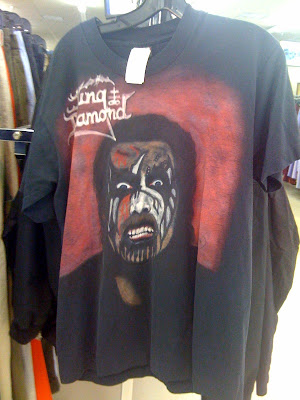 Right before halloween, I found myself at a local thrift store shopping around for items to complete my costume. It was during that trip that I found one of the greatest pieces of clothing ever to be seen at a thrift store. As you can see from the picture above, I'm talking about a hand-painted King Diamond shirt. I was so excited about the shirt, that I quickly bought it without even thinking about it. I was extremely happy with my purchase, and even emailed a photo of the shirt to fellow M.I. staffers. Why bring up this shirt you ask? Because I now own it, but will never really wear it. Back in the day, I would have rocked the shit out of this thing. Today, I find myself staring it at the lonely shirt in my drawer...King Diamond's eyes look back at me and he says "Hey man, back in the day...you would have worn this shirt everyday! Don't be a poser!" I look back at King and say "Dude, those were different times, I have a job now. I'm older. I can't wear a shirt like this to work! Maybe during the summer I'll wear it when I cut the grass in the backyard." Notice that I tell King "when I cut the grass in the backyard", because I'd be afraid to be seen by the neighbors cutting the grass in the front lawn wearing this shirt. I know what you're saying, I'm a huge poser, and I shouldn't care. But this, my friends, is the moment in life in which I find myself. I guess I care. I guess I've finally realized that wearing a shirt with a handpainted King Diamond face is not exactly the coolest thing to wear around town. If a 12 year old version of me saw how I'm living he would laugh and then yell at me for not rocking this shirt 24/7. That 12 year old version of me would then ask me when I'm going on tour with my thrash band. I would have to hang my head low and tell the truth. I'm not in a thrash metal band.

Exhibit B: My Homemade Traper Keeper Back in the 80s, Trapper Keepers were the hottest article to have during school hours. This was even true in the slightly backwards country where I grew up. The Mead corporation had us all by the balls. Sadly, my parents were never able to buy me one of these highly covetted three-ring binders. Instead, from an early age, I learned to make my own custom three-ring binders. Above is a picture of one such binder I made. This one is actually from 1992/1993, a time when the Trapper Keeper madness had already worn down, but my need for such a binder apparently hadn't. Though you may think that the bands featured on this binder were my absolute favorite at the time, you'd be partially wrong. If a band was my favorite, I would normally keep such clippings in a scrapbook type binder that my brother and I kept. As such, almost any band could have made it into one of my designer binder covers, but there were certainly bands I was rather into at the time. As you can see, this one features an all-star line-up. Cannibal Cropse, Gwar, Entombed, Benediction (!), and Nuclear Assault. Upon finding this binder in an old box of crap I keep around, I asked myself whether I'd willing to make such a folder for myself today. Before I asked the question, I knew the answer. No way in hell. Not only do I not know where to buy Contact paper anymore, I also don't want to be seen carrying such a thing around. Again, a sign of the times. Back in the day, this thing was my most prized possession. Today, it's merely a digital picture for me to scoff at. Contrary to how this may all sound to you, I'm rather comfortable with my age and how life has turned out. Very comfortable actually. Having said that, it's still odd to look back into the rearview mirror from time to time...and see a young kid with a mullet, a King Diamond shirt and a homemade three-ring binder waving back at me.
Posted by Klaus at 1:57 AM