Where are they now: Danny Spitz (with a little Nicko McBrain thrown in for good measure)

Check out Danny's eyes, he's looking in 27 different directions at the same time.

Known the world-over for our hard-hitting research and investigative reports, Metal Inquisition once again steps up to deliver the goods. This time we are looking into one of our favorite figures in the world of metal. I'm referring, of course, to the leading 5'1", cross-eyed watchmaker in the greater Boca Raton area: Danny Spitz.

We've reported before about Danny's business ventures, but decided to take a closer look at his life, and accomplishments away from the world of metal. What did we find? Some watches, some Maiden and a whole lot of baby Jesus. 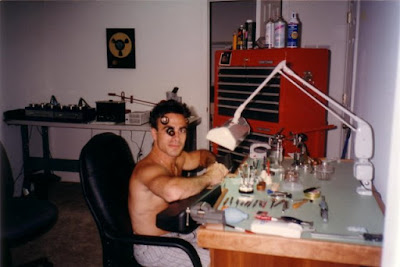 Who's that tiny man behind the big desk? Is that one of Santa's elves hard at work in the workshop?
After years of playing with Anthrax, Danny was kicked out due to "a severe disinterest in playing guitar." After that time, Danny decided to cut his ties to music, going as far as ripping out all stereos from has cars. This is according to his website, but to be fair he probably did so because a cassette of Attack Of The Killer B's was probably stuck in there. Can you blame the guy? I'd rip out my car stereo too. He also gave away most of his guitars to Hard Rock Cafes all over the world. Damn! If any reader has seen his Teenage Mutant Ninja Turtles Jackson flying-v while munching on a delicious cheeseburger in a Hard Rock Cafe in a Caribbean island, please let me know on the double! I dream of being in the presence of that sweet axe! 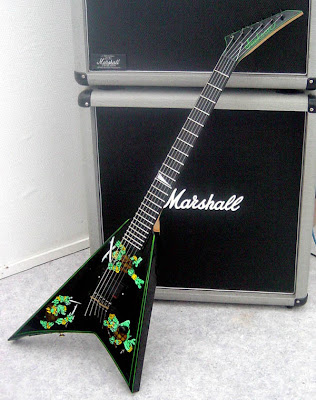 I dream of looking at that amazing fretboard while I dine on a fine cheeseburger.

It was at that time that Danny went on to pursue his life-long dream of learning how to replace watch bands, and batteries. Perhaps one day he was walking by a Dakota Watch Company stand at the mall, and he thought to himself "I really want to change batteries and watchbands, just like that teenager. By god, I will pursue this dream!". Danny got a bunch of degrees in Switzerland from schools no one has ever heard of, and he's now licensed to change the batteries in my Casio calculator watch. 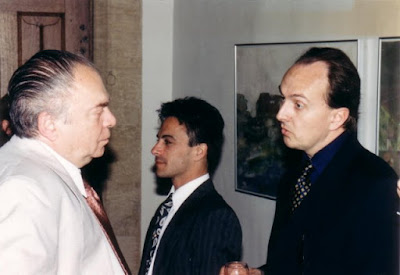 Danny on graduation day in Switzerland. Is that Lars Ulrich to his right? Does this mean that Lars also knows how to change my watch battery? If it is Lars, he's actually the tallest person in a picture for once!
Danny now owns his own repair shop in Boca Raton, and has attempted to launch his own watch company. It was at his Boca Raton shop that he reconnected with Nicko McBrain from Iron Maiden, who went in to get a strap on his watch replaced or something. This is where things get more interesting, at least for me. Nicko and Danny started making music in Danny's studio after meeting up at the shop. Aside for their shared love of music, watches, and living in Florida (who knew Boca Raton was the preferred retirement spot for aging rockers?), they are both really into Jesus. Big time. You see, Danny was born Jewish, but converted to Messianic Judaism, which really has nothing to do with Judaism. They believe in good ol' JC, and are similar to Jews For Jesus. As a matter of fact, once you convert to Messianic Judaism, Israel will refuse to give you citizenship. But enough about that. Turns out, Nicko is also way into the Lord. He converted upon setting foot inside Spanish River Church, a Boca Raton mega-church, after his wife begged him to go. Once inside the church, he began to cry uncontrollably, according to him. 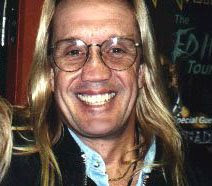 Nice to see that Nicko has already started to wear the standard-issue David Koresh glasses. Nothing accents a pug-face like his like those shop safety glasses do. Nice job Nicko.

So it makes sense that these two started to play music. Though there is no word from Anthrax about Danny's possible attempts to convert them, Nicko says the following about Iron Maiden:

"I can't say to you that I'm trying to convert all these guys in my band to be Christians. I'm leading them on my route, and if they choose to follow what God's plan is in the Bible, that's up to them. I say to them all, you know, look, in my belief, at the moment, if you turn to your saviour Jesus Christ, I'll have eternal life in Heaven with you!"

Anyway the band they started, called 7x70 (a biblical refereence), also featudred Vanilla Ice (no joke), and Dave Ellefson from Megadeth, though Dave never actually played with them. No material was ever released. It's sad that the world missed out on the amazing music that such a brain trust would surely put together. Can you imagine? I picture it starting out with the bass line from Peace Sells. After that, the drums from Run To the Hills start up (yes, I know Clive Burr played that song originally) and then some sweet leads kick in courtesy of Danny. Once it all gets going, Vanilla Ice starts rapping over the whole thing. Can you say "amazing"?

Danny is currently doing another band with members from Accept and King Diamond, who are no doubt born again christians of some sort as well. Danny actually unveiled his plans for this band at the Cornerstone Festival. In his site he wrote:

I do feel (as I did in the past) that I have created an entirely new sound never heard by the human ear before.

"As I did in the past"? Is he talking about his solo in "Indians", because I would have to agree. That shit was blazin'! Anyway, Danny is now married to a woman named Candi. Who he said this about:

Uh...okay. Candi is the daughter of a lesbian singer from Tampa, who primaraly sings Judy Garland showtunes. This is her site. They have twins together, who act in Volkswagen commercials (the latest ones for the minivan which star Brooke Shields) and were also in the Batman movie. If you are way into babies, you can read a whole interview about them here. Move over Olsen twins! Mini-Daddy needs to cash in after being fired from Anthrax! 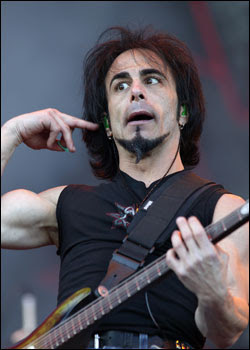 Oh my! Look at that facial hair! Do I detect a mild case of Robb Flynn's disease? Also, those are so amazingly sculpted eyebrows.

After typing all this down, I'm both tired and depressed. I'm gonna' go listen to Among The Living while I take a nap.