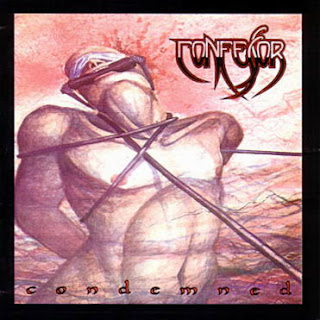 "You've never heard anything like this!" is, for the most part, an overused and meaningless phrase, that is unless you happen to be talking about Confessor. Their debut album, Condemned, is one of the most uniquely bizarre metal records I've ever heard. A brilliant mix of seemingly incongruous elements Confessor's deranged sound is truly unforgettable. Imagine a vocalist that sounds like a woman screaming for her life, doom riffs so heavy and crunchy they'd make Candlemass green with envy, and serpentine drumming so complex and off-kilter it'd make Tomas Haake's head spin. Released back in 1991 on Earache Records, it's easy to see how Condemned flew over everyone's heads and was relegated to obscurity while poseurs everywhere were busy listening to Necroticism and Blessed Are the Sick. Musically, these guys did not fit in at all with the death metal scene that was just coming to prominence. They were operating on a completely different level, orbiting somewhere in outer space. This record was so ahead of its time I still don't think we've caught up.

And how about the brutal cover art? Beautifully rendered in colored pencil against a stark background, a presumably nude male writhes bound, gagged, and blind-folded as he's shot in the back of the head. It's a masterpiece.

Confessor broke while trying to record the follow-up to Condemned around 1993, but reformed in 2002 to play a benefit for their recently deceased guitarist Ivan Colon (R.I.P.). They finally released their sophomore album, Unraveled, in 2005. It sounds like Alice in Chains and highly recommend everyone check it out. Now for some killer videos...


This first video is one of the most awesome things I've ever seen. It features a young Confessor performing at a water park that no longer exists called Fame City in Houston, Texas back in 1988. The quality is incredible. When the camera pulls back to reveal that they're playing on a gigantic poolside stage with people sunbathing just a few feet away... fucking surreal. I'm a big fan of singer Scott Jeffreys' neon green short shorts.


This is the music video for the song "Condemned." Pretty standard concert footage with some stupid artsy effects, but this song rules and you get more of Scott Jeffereys' wild head banging and plenty of shots of Steve Shelton murdering his drums.


Last, but certainly not least is a special bonus video for all your drum nerds out there (I'm looking at you, Lucho Metales). In this video Steve Shelton takes your ass to school. He shows you how to play the intro to Condemned and talks about how much he loves choppy, awkward rhythms. Watch in awe as he puts 99.9% of all metal drummers to shame.
Posted by Gene Hoglan's Balls at 8:00 AM