More Metal Tattoos From The Interweb

Thanks to the magic of search engines and the internet, we once again take you for a spin around the world of metal tattoos. Hold on tight, it's going to be a depressing and bumpy ride. 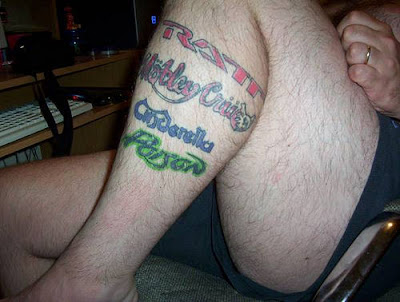 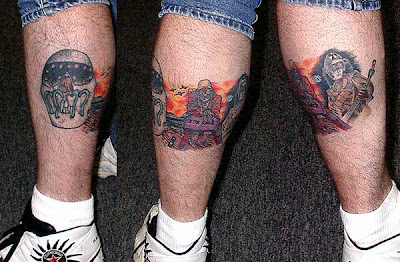 How many of you were surprised that the asshole who has this tattoo is wearing white hi-tops, and white ankle socks. Anyone? No? Good. I wasn't either. 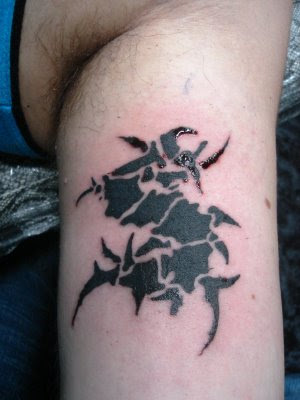 This picture is proof that men are not only idiots, but also gross. Look at that disgusting armpit hair, or whatever body part that is. I've never felt so hetero in my life. 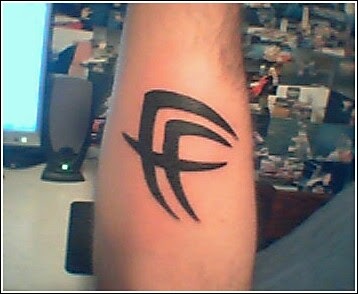 The Sarge and I saw Fear Factory some years ago in what was basically a midwestern parking lot. They played a Pantera song, and we both got the douche chills. This is the kind of tattoo that the dude who has it would show to the band members with great pride. The band members would then go "uh....wow...really? Sheesh. Wow."

Look, I know that the guy's dead and everything. It's sad, wah, wah, wah...but how big of a douche do you have to be to get this on your arm? I can just picture the guy getting it constantly reminding the tattoo dude "remember to make the goatee red, it's very important. I'm a huge fan of how he looked during the Far Beyond Driven years!" 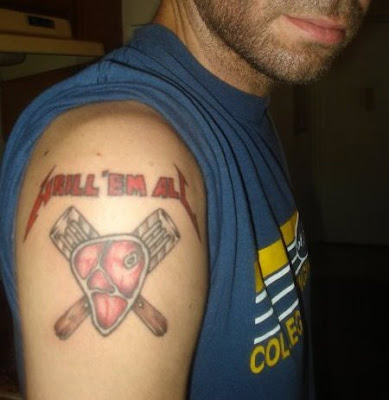 This guy is my hero. I'm not being ironic. He's rad. 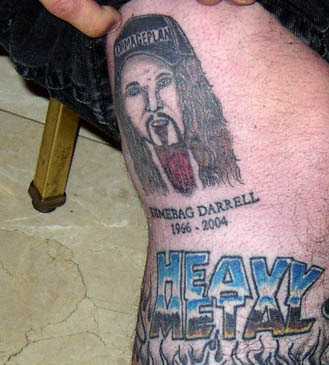 Late addition, suggested by a reader in the comments section. I don't even know where to start! The awful rendering with the fu-manchu mustache, the hat, the goatee, the pimples on Dimebag's forehead....oh and did I mention the Heavy Metal logo?

Who is the only person dumber than Max Cavalera? The guy who gets a tattoo of Max Cavalera. 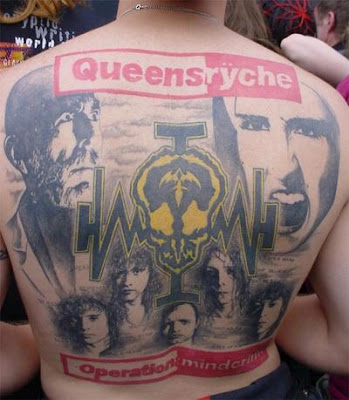 Now this, my friends, is commitment. I would love to meet this guy and tell him "I'm a real Queensryche fan, not like you" just to watch his blood boil and his head blow up.

Any readers out there have band-related ink? Tell the truth, I know there's at least one Napalm Death or a Nasty Savage tattoo out there somewhere.
Posted by Klaus at 1:31 AM