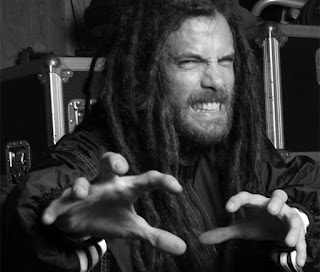 Rare shot of Chris Barnes having a panic attack, after realizing that he doesn't make enough money to make the payments on his 1993 Toyota Tercel.

There was a time when Chris Barnes was taken half-seriously by some. That was before he started wearing JNCO jeans and track jackets. When you listen to his stage banter abilities (from his Cannibal Corpse days) you realize that the man was in fact a genius. Oh how the mighty have fallen.