My Life As A Poet (AKA: Stealing From Slayer) 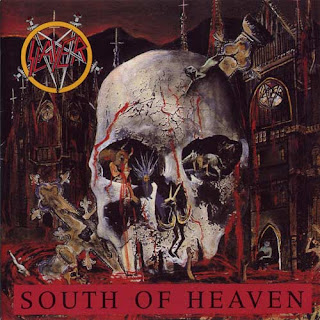 I learned how to speak English around the time I was 12, after moving to the US of A. I won't bore you with the details under which the move happened. I will, however, tell you that upon landing on American soil both my brother and I were rocking severe mullets, and were both sporting our jean jackets (with dope back patches).

Learning English was tough, but within a few months I had a pretty good command of the language. It was around that time, however, that my English class had an assignment I simply could not complete with my less-than-perfect skills in such a new language: poetry. After quickly realizing that I simply didn't have the necessary command of the language to write a variation on "roses are red, violets are blue..." I quickly decided to do what any self-respecting metal head would do. Steal from Slayer.

For some unknown reason, the song I decided to go with still baffles me to this day, "Silent Scream". At such an young age, the idea of abortion had barely entered my mind...so I have no idea why on earth I thought a graphic song about that subject would make for a perfectly appropriate poem to pass off as my own. In case you've forgotten the lyrics, please read them below. Imagine what a teacher must have thought, and keep in mind that I was 12 at this point.

Nightmare, the persecution
A child's dream of death
Torment, ill forgotten
A soul that will never rest

Guidance, it means nothing
In a world of brutal time
Electric, circus wild
Deep in the infants mind

Embryonic death
Embedded in your brain
Suffocation, strangulation
Death is fucking you insane

Nightmare, the persecution
A child's dream of death
Torment, ill forgotten
A soul that will never rest

I'm fairly certain that the only change I made to the song's lyrics, in order for them to be acceptable as homework, was to remove the work "fucking", but that was about it. The fact that my parents weren't contacted as a result, or that the authorities weren't called is amazing.

I should point out that doing this (plagiarism at an early age) runs in my family. My brother did it once (maybe he'll post about it) and my cousin did also. My cousin decided to pass off the lyrics to Public Enemy's "Fight The Power" as his own. He got an A, and was asked to read his poem outloud in class. No, I'm not making this up. Imagine the reaction of a 20 teenagers circa 1989 listening to a classmate try to pretend that the song they all knew was a poem. Classic.

Anyway, I'd like to blame this whole thing on not totally understanding English at that point in my life...but I don't think that was the case. This is just further proof that I have always been an absolute idiot.
Posted by Klaus at 5:42 AM