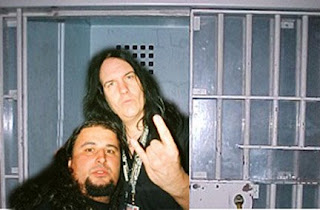 A candid shot of Evil D and his prison bitch, Alessandro.

If you've ever been to Italy, then you know that Italians do not fuck around when it comes to airport security. They may not be able to win a war or protect their borders, but you cannot fuck with an Italian airport. There's carabinieri all over the place casually packing fully automatic firearms and I cannot tell you how many times I've had my luggage ransacked for no reason other than to make my life miserable.  It's no surprise then to find out that one of our favorite 90s death metal retards, David Vincent AKA Evil D, was arrested and charged with a weapons offence for carrying a bullet belt (Thanks to our loyal reader Jason for the tip). You can read the full Metal Hammer article about the incident here. Having personally spent many hours in Italian airports I cannot tell you how amusing I find this whole incident. I can totally picture airport security pulling the bullet belt out of Evil D's luggage, inspecting it, looking at each other, him pleading with them that it's not made of real bullets, then them whispering something to each other and within seconds 15-20 carabinieri swarming Evil D and escorting him to a holding cell. I'm not surprised that they questioned him for two and a half hours. When it comes to matters of airport security, Italians like to be thorough. When asked for a comment on the situation Evil D responded in his characteristic dickhead manner. "For 20 years I've had my same friendly bullet belt with me at all metal occasions. After 20 years of being a lawless individual, I'm happy that the Keystone Kops of spaghetti western fame have been able to show me the error of my ways." I'm sure it's that kind of attitude that got him into this fine mess in the first place. He's lucky the Italians are such understanding, forgiving people. In foreign countries around the world people have been brought before firing squads for much less! 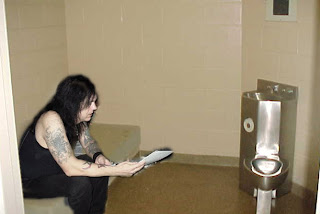 Evil D going over the lyrics to a new song entitled "Eradication of the Etruscans."
Posted by Gene Hoglan's Balls at 4:22 PM